Eastchester is a town in southern Westchester County, New York, United States. The population was 32,363 at the 2010 census. There are two villages within the town: Bronxville and Tuckahoe. The town contains a census-designated place also named Eastchester.

The town that is now called Eastchester began settlement in 1664 when ten families migrated from Fairfield, Connecticut. Thomas Pell, who at that time also owned the territory that is now New Rochelle and Pelham, granted a deed to the group to "settle down at Hutchinsons'," where the home of Anne Hutchinson had stood some twenty years before. The ten original families were shortly joined by another 26.

Laws for the region were established the following year, in 1665, under an agreement called the "Eastchester Covenant". The covenant was a rare document for this period. It contained 26 provisions, including such items as education of children, disposition and upkeep of property, and support of a minister.

Confirmation of their 1664 land patent was granted by Governor Richard Nicolls in 1666 after the occupation of the area by the English.

Eastchester was a farming community at the outbreak of the American Revolution. Although no major battles were fought here, as the heart of the Neutral Ground it saw constant fighting for over 13 years, being harassed by both sides as well as by the cowboys and skinners (the guerrillas of the day). Eastchester's rural makeup began to change with the coming of the railroad in the 1840s. An area of 370 acres (1,500,000 m2) of land was incorporated as the village of Mount Vernon in 1853 by a group of New York businessmen; Today, Eastchester is bounded by Scarsdale on the north, New Rochelle on the east, Yonkers on the west, and Mount Vernon on the south. The town covers approximately five square miles, including Bronxville and Tuckahoe.

Babe Ruth was a member of Leewood Country Club.

The Marble Schoolhouse and Tuckahoe High School are listed on the National Register of Historic Places.

The Wilmot School near the corner of White Plains Road and Wilmot Road was a K-8 school that serviced the north end of town after 1909. When the Greenvale elementary school was erected in 1936, the Wilmot School was put to use as Eastchester's Town Hall. In 1964, the clubhouse of the Oak Ridge Country Club was converted into the present Town Hall, and the Wilmot School was torn down. The Cooper School, located in the northern end of town, was an elementary school built in the 1920s. It was demolished in 1980 and the land sold to a private housing developer. The original schoolyard lives on as Cooper Field, leased to the town of Eastchester at the rate of one dollar per year. The park is also referred to as Vaccaro Park, as it was originally donated by Carmela Vaccaro the matriarch of one of the largest and longest standing families in Eastchester. The Anne Hutchinson School, another elementary school, was built in 1953, and additional classrooms constructed several years later. A primary wing was built at the Greenvale School in the 1950s. 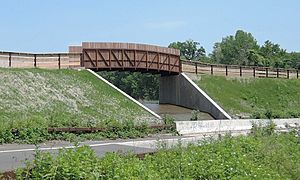 There were 12,626 households out of which 31.4% had children under the age of 18 living with them, 55.7% were married couples living together, 8.7% had a female householder with no husband present, and 33.4% were non-families. 29.8% of all households were made up of individuals and 13.1% had someone living alone who was 65 years of age or older. The average household size was 2.46 and the average family size was 3.09. 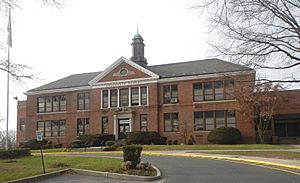 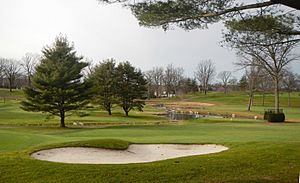 All content from Kiddle encyclopedia articles (including the article images and facts) can be freely used under Attribution-ShareAlike license, unless stated otherwise. Cite this article:
Eastchester (town), New York Facts for Kids. Kiddle Encyclopedia.