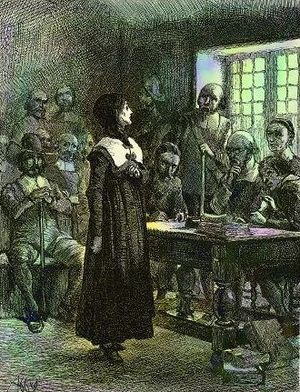 Anne Hutchinson (baptized July 20, 1591 - August or September 1643), was a religious dissenter in Puritan New England. Her parents are Francis Marbury and Bridget Dryden. Her father, being a clergy, homeschooled Anne Hutchinson. She got more education than most other girls at that time. She was the defendant in the most famous of the trials intended to suppress religious dissent in the Massachusetts Bay Colony. She was born Anne Marbury in Alford, Lincolnshire, England. She, her husband William, and their children left England for the Massachusetts Bay Colony in 1634. Once settled, she began holding weekly meetings in her home to discuss sermons and theology.

Her religious views did not agree with those of her Puritan neighbors. They believed good works were necessary for salvation. Hutchinson believed that only faith (Sola fide) was necessary. She also believed that God revealed himself to people without the help of the clergy. Community leaders viewed Hutchinson as a threat. She was found guilty of heresy in 1637, and told to leave the colony.

Hutchinson and her family moved first to Rhode Island. After her husband's death in 1642, she settled near present-day Pelham Bay on Long Island Sound. In 1643, Hutchinson, all her children except one, and all her servants were killed in an attack perpetrated by Native Americans. Her death was regarded by some in Massachusetts Bay as evidence of divine judgment.

All content from Kiddle encyclopedia articles (including the article images and facts) can be freely used under Attribution-ShareAlike license, unless stated otherwise. Cite this article:
Anne Hutchinson Facts for Kids. Kiddle Encyclopedia.