Kids Encyclopedia Facts
This article is about a building. For the similarly named legislative body, see Massachusetts House of Representatives. 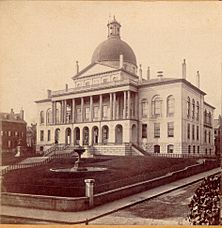 Stereograph image of the Massachusetts State House c. 1862, before the addition of wings. The copper dome was first painted gray to appear as stone, and then was gilded in 1872.

The front gate of the State House, located on Beacon Street. 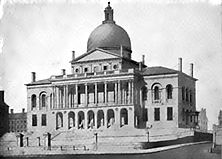 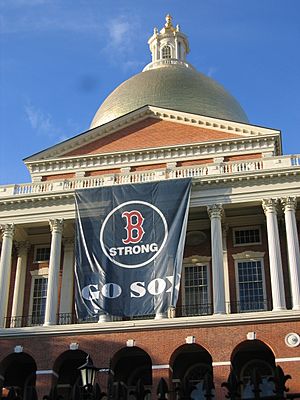 The Massachusetts State House, also known as the Massachusetts Statehouse or the New State House, is the state capitol and seat of government for the Commonwealth of Massachusetts, located in the Beacon Hill neighborhood of Boston. The building houses the Massachusetts General Court (state legislature) and the offices of the Governor of Massachusetts. The building, designed by architect Charles Bulfinch, was completed in January 1798 at a cost of $133,333 (more than five times the budget), and has repeatedly been enlarged since. It is considered a masterpiece of Federal architecture and among Bulfinch's finest works, and was designated a National Historic Landmark for its architectural significance.

The building is situated on 6.7 acres (27,000 m2) of land on top of Beacon Hill in Boston, opposite the Boston Common on Beacon Street. It was built on land once owned by John Hancock, Massachusetts's first elected governor. The Masonic cornerstone ceremony took place on July 4, 1795, with Paul Revere, Deputy Grand Master of the Grand Lodge of Massachusetts, presiding.

Before the current State House was completed in 1798, Massachusetts's government house was the Old State House on what is now Washington Street. For the building's design, architect Charles Bulfinch made use of two existing buildings in London: William Chambers's Somerset House, and James Wyatt's Pantheon.

The Commonwealth completed a major expansion of the original building in 1895. The architect for the annex was Bostonian Charles Brigham.

In 1917, the east and west wings, designed by architects Sturgis, Bryant, Chapman & Andrews, were completed.

In July 2016, Governor Charlie Baker proposed to the state legislature to sell 300 square feet (28 m2) of permanent easement on the west side of the State House lawn to a neighboring condominium. The land in question was once pasture owned by John Hancock and the easement would allow for the addition of au pair units.

The original wood dome, which leaked, was covered with copper in 1802 by Paul Revere's Revere Copper Company. Revere was the first American to roll copper successfully into sheets (for copper sheathing) in a commercially viable manner.

The dome was first painted gray and then light yellow before being gilded with gold leaf in 1874. During World War II, the dome was painted gray once again, to prevent reflection during blackouts and to protect the city and building from bombing attacks. In 1997, at a cost of more than $300,000, the dome was re-gilded, in 23k gold.

The dome is topped with a gilded, wooden pine cone, symbolizing both the importance of Boston's lumber industry during early colonial times and of the state of Maine, which was a district of the Commonwealth when the Bulfinch section of the building was completed. 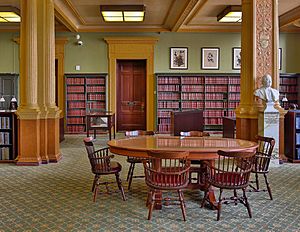 Reading room of the State Library of Massachusetts 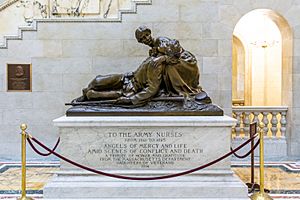 The House Chamber is decorated with murals by Albert Herter, father of Massachusetts Gov. Christian Herter. Murals on the second floor under the dome were painted by artist Edward Brodney. Brodney won a competition to paint the first mural in a contest sponsored by the Works Progress Administration in 1936. It is entitled "Columbia Knighting Her World War Disabled". Brodney could not afford to pay models, and friends and family posed. The model for Columbia was Brodney's sister Norma Brodney Cohen, and the model for the soldier on one knee in the foreground was his brother Fred Brodney. In 1938, he painted a second mural under the dome called "World War Mothers". The models were again primarily friends and family members, with sister Norma sitting beside their mother Sarah Brodney. The New York Times notes that the murals are relatively rare examples of military art with women as their subjects.

A staircase in front of the Bulfinch building leads from Beacon Street to Doric Hall inside the building. The large main doors inside Doric Hall are only opened on three occasions:

The Samuel Adams and Paul Revere time capsule is a metal box located in a cornerstone of the State House, placed there in the late 18th century and rediscovered in 2014. The contents include coins, newspaper clippings and other historical artifacts.

The State House contains the primary offices of all the commonwealth's Constitutional officers with exception of the Attorney General, who is based at the nearby McCormack Building.

One corridor of the building's fourth floor is a sort of Newspaper Row, anchored by the large Press Gallery suite where reporters from a range of publications maintain desks. The central Press Gallery room was given to use of reporters by the Legislature in 1909. The Massachusetts State House Press Association, established in 1909, governs these shared workspaces. Some individual news outlets have separate offices.

All content from Kiddle encyclopedia articles (including the article images and facts) can be freely used under Attribution-ShareAlike license, unless stated otherwise. Cite this article:
Massachusetts State House Facts for Kids. Kiddle Encyclopedia.