Eastchester is a working-class neighborhood in the northeast Bronx in New York City. Its boundaries, starting from the north and moving clockwise are the Bronx-Westchester County border to the north, the New England Thruway to the east, Baychester Avenue to the south, and the intersection of 233rd Street and Baychester Avenue to the west. Boston Road is the primary thoroughfare through Eastchester and Dyre Avenue is the main commercial street. Eastchester includes the sub-neighborhood of Edenwald.

Eastchester is part of Bronx Community Board 12, and its ZIP Codes include 10466 and 10475. The area is patrolled by the 47th Precinct of the New York City Police Department. 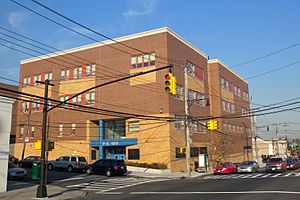 233rd Street and Boston Road are the major thoroughfares in Eastchester. Intersecting both of these streets, Dyre Avenue is the neighborhood's main commercial strip. There is also a shopping center, Shopwell Plaza (named for the former Shopwell supermarket chain) located on Boston Road next to the Boston-Secor housing project. In 2007 the city's parks department rehabilitated Seton Falls Park.

Since the mid-20th century, the neighborhood's name began to decline in currency, meaning that in recent years residents have not really been cognizant about living in a neighborhood called "Eastchester." This is perhaps due to confusion with Eastchester Road, a thoroughfare which runs through other parts of the Bronx, or with the Town of Eastchester in Westchester County. It is more common to hear the Eastchester neighborhood described as "east of White Plains Road", "south of Mount Vernon", "near Pelham", "East 233rd Street", etc. 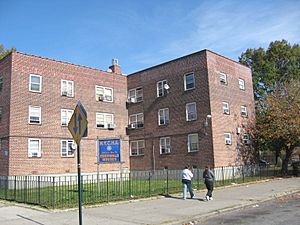 Eastchester is dominated by one and two family homes of various types, one large public housing project, and an industrial district. The total land area is roughly half a square mile. The area is low laying and flat. The Hutchinson River runs through Eastchester, partly along the line of East 233rd Street. Bridges in Eastchester carry the New England Thruway and Boston Road over the river. A far northeastern portion of Eastchester, on the left bank of the Hutchinson River, is often confused with Pelham Manor since a nearby shopping center is located in that town.

Edenwald Houses is the largest New York City Housing Authority development in the Bronx, with forty buildings, 3 and 14-stories tall on 48.88 acres (197,800 m2). It has 2,036 apartments housing about 5,300 people. Completed on October 15, 1953 it is bordered by Grenada Place, East 225th Street, Baychester and Laconia Avenues. The Edenwald Projects is divided into two parts, the northside and the southside, which are split by East 229th street. Bordering the south side is the Edenwald Community Center, which provides afterschool care and programs for the youth. During the summer, the center hosts a summer program for kids and jobs for pre-teens.

Eastchester has a population over 5,000. The neighborhood is a mix of African Americans, West Indians, Asians, Hispanics and Whites. 47.8% of the population lives below the poverty line.

The entirety of Community District 12, which comprises Eastchester and Williamsbridge, had 156,542 inhabitants as of NYC Health's 2018 Community Health Profile, with an average life expectancy of 81.0 years. This is about the same as the median life expectancy of 81.2 for all New York City neighborhoods. Most inhabitants are youth and middle-aged adults: 24% are between the ages of between 0–17, 27% between 25–44, and 26% between 45–64. The ratio of college-aged and elderly residents was lower, at 10% and 13% respectively.

Subway service is provided by the New York City Subway via the following IRT Dyre Avenue Line stations, served by the 5 train:

The former PS 15 was listed on the National Register of Historic Places in 1981. There are three public elementary schools, PS 68, PS 111, and PS 112. Sixth grade to eighth grade students attend John Philip Sousa MS 142. The only public high school in the area is Albert Tuitt Educational Campus; however, many students attend Harry S. Truman High School in neighboring Co-op City. Those seeking a parochial education can attend Cardinal Spellman High School (co-ed) or either Mount Saint Michael Academy (all boys) in Wakefield or St. Barnabas High School (all girls) in Woodlawn.

All content from Kiddle encyclopedia articles (including the article images and facts) can be freely used under Attribution-ShareAlike license, unless stated otherwise. Cite this article:
Eastchester, Bronx Facts for Kids. Kiddle Encyclopedia.