Co-op City (short for Cooperative City), located in the Baychester section of the borough of the Bronx in northeast New York City, is the largest cooperative housing development in the world. Situated at the intersection of Interstate 95 and the Hutchinson River Parkway, the community is part of Bronx Community Board 10. If it were a distinct municipality, it would be the 10th largest city in New York State. Nearby attractions include Pelham Bay Park, Orchard Beach and City Island. The community's Zip code is 10475. 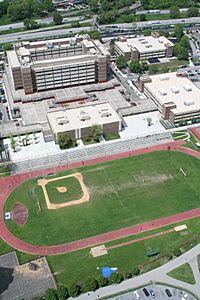 Originally a swamp, the site was formerly the home of a 205-acre amusement park named Freedomland that operated from July 1960 to September 1964. Construction on Co-op City began in May 1966. Residents began moving in during December 1968, and construction was completed in 1973. Its 15,372 residential units, in 35 high rise buildings and seven clusters of townhouses, make it the largest single residential development in the United States. It sits on 320 acres (1.3 km2) but only 20% of the land was developed, leaving many green spaces. The apartment buildings, referred to by number, range from 24 floors to as high as 33. There are four types of buildings; Triple Core, Chevron, Tower and Town House. The 236 townhouses, referred to by their street-name cluster, are three stories high and have a separate garden apartment and upper duplex three-bedroom apartment.

This "city within a city" also has eight parking garages, three shopping centers, a 25-acre (100,000 m2) educational park, including a high school, two middle schools and three grade schools (the high school, Harry S. Truman High School, is unusual for having a planetarium on the premises), power plant, a 4-story air conditioning generator and a firehouse. More than 40 offices within the development are rented by doctors, lawyers, and other professionals and there are at least 15 houses of worship. Spread throughout the community are six nursery schools and day care centers, four basketball courts and five baseball diamonds. The adjacent Bay Plaza Shopping Center has a 13-screen multiplex movie theater, department stores, and a supermarket.

The development was built on landfill; the original marshland still surrounds it. The building foundations extend down to bedrock through 50,000 pilings, but the land surrounding Co-op's structures settles and sinks a fraction of an inch each year, creating cracks in sidewalks and entrances to buildings. 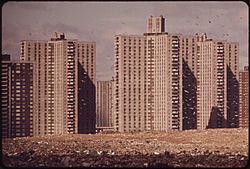 The project was sponsored and built by the United Housing Foundation, an organization established in 1951 by Abraham Kazan and the Amalgamated Clothing Workers of America. It was designed by cooperative architect Herman J. Jessor. The name of the complex's corporation itself was later changed to RiverBay at Co-op City.

The construction of the community was financed with a mortgage loan from New York State's Housing Finance Agency (HFA). The complex defaulted on the loan in 1975 and has had ongoing agreements to pay back HFA, until 2004 when it was financially unable to continue payments due to the huge costs of emergency repairs. New York Community Bank helped RiverBay satisfy its $57 million mortgage obligation, except for $95 million in arrears, by refinancing the loan later that same year. This led to the agreement that Co-op City would remain in the Mitchell-Lama Housing Program for at least seven more years as a concession on the arrears and that any rehabilitation that Co-op City took on to improve the original poor construction (which happened under the State's watch) would earn credit toward eliminating the debt. By 2008, RiverBay had submitted enough proof of construction repairs to pay off the balance of arrears to New York State.

Mismanagement, shoddy construction and corruption led to the community defaulting on its loan in 1975. The original Kazan board resigned and the state took over control. Cooperators were faced with a 25 percent increase in their monthly maintenance fees. Instead, a rent-strike was organized. New York State threatened to foreclose on the property, and evict the tenants — which would mean the loss of their equity. But Cooperators stayed united and held out for 13 months (the longest and largest rent-strike in United States history) before a compromise was finally reached, with mediation from then Bronx Borough President, Robert Abrams, and then Secretary of State, Mario Cuomo. Cooperators would remit $20 million in back pay, but they would get to take over management of the complex and set their own fees. 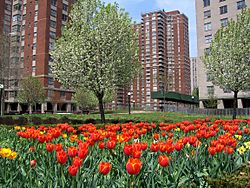 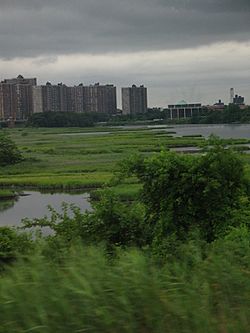 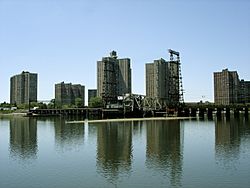 Within the first decade of the 2000s, the aging development began undergoing a complex-wide $240 million renovation, replacing piping and garbage compactors, rehabilitating garages and roofs, upgrading the power plant, making facade and terrace repairs, switching to energy-efficient lighting and water-conserving technologies, replacing all 130,000 windows and 4,000 terrace doors (costing $57.9 million in material and labor) and all 179 elevators. The word "renaissance" is being used to describe this period in Co-op City history. Many of these efforts are also helping in the "greening" of the complex: the power-plant will be less polluting, the buildings will be more efficient and recycling efforts will become more extensive. The New York State Energy Research and Development Authority (NYSERDA) awarded its largest ever grant—$5.2 million—to the community under its NY Energy $mart Assisted Multifamily Program.

In 2003, after a partial collapse in one garage, inspectors found 5 of the 8 garages to be unsafe and ordered them closed for extensive repairs. The other 3 garages were able to remain partially open during repairs. To deal with the parking crisis, New York City allowed angled parking in the community, the large greenways in the complex were paved over to make outdoor parking lots and agreements were made with nearby shopping centers to use their extra parking spaces. January 2008 was the first time in over 41⁄2 years that all the garages were back open. The greenways are in the process of being restored.

Financial responsibility for these upgrades was the subject of a protracted dispute between RiverBay and the State of New York. Co-op City was developed under New York's Mitchell-Lama Program, which subsidizes affordable housing. RiverBay charged that the state should help with the costs because of severe infrastructure failures stemming from the development's original shoddy construction, which occurred under the supervision of the state. The state countered that RiverBay was responsible for the costs because of its lack of maintenance over the years. In the end, a compromise had the state supplying money and RiverBay refinancing the mortgage, borrowing $480 million from New York Community Bank in 2004, to cover the rest of the capital costs.

In 2007, the power plant was in the process of upgrading from solely managing the electricity brought in from Con Edison to a 40-megawatt tri-generation facility with the ability to use oil, gas or steam (depending on market conditions) to power turbines to produce its own energy. The final cost of this energy independence could be as much as $90 million, but it is hoped to pay for itself with the savings earned—with conservative estimates at $18 million annually—within several years. Also, whatever excess power generated after satisfying the community's needs will be sold back to the electrical grid, adding another source of income for RiverBay.

In September 2007, a report by the New York Inspector General, Kristine Hamann, charged that the Division of Housing and Community Renewal (DHCR), which is responsible for overseeing Mitchel-Lama developments, was negligent in its duties to supervise the contracting, financial reporting, budgeting and the enforcement of regulations in Co-op City (and other M-L participants) during the period of January 2003 to October 2006. The report also chided Marion Scott management for trying to influence the RiverBay Board by financing election candidates and providing jobs and sports tickets to Board members and their family/friends—all violations of DHCR and/or RiverBay regulations. The DHCR was instructed to overhaul its system of oversight to better protect the residents and taxpayer money.

In October 2007, a former board president, Iris Herskowitz Baez, and a former painting contractor, Nickhoulas Vitale, pleaded guilty to involvement in a kickback scheme. While on the RiverBay Board, Baez steered $3.5 million in subsidized painting contracts for needed work in Co-op City apartments, to Vitale's company, Stadium Interior Painting, in exchange for $100,000 in taxpayer money. Ms. Herskowitz Baez was sentenced to 6 months in jail, 12 months probation and given a $10,000 fine in March 2008.

Because of its large senior citizen block—well over 8,300 residents above the age of sixty as of 2007—it is considered the largest naturally occurring retirement community (NORC) in the nation and its Senior Services Program has extensive outreach to help its aging residents, most of whom moved in as workers and remained after retiring.

Co-op City was home to a large Jewish community during its early years, as well as Italian Americans and Irish Americans; many of them had relocated from other areas of the Bronx, such as the Grand Concourse. With African Americans making up a large minority, the community became known for its ethnic diversity. As early tenants grew older and moved away, the newer residents reflected the current population of the Bronx, with African American and Hispanic residents comprising the majority of residents by 1987. In the 1990s, after the fall of the Soviet Union, the neighborhood received an influx of former Eastern Bloc émigrés, especially from Russia and Albania.

Co-op City is served by New York City Bus routes Bx5, Bx12, Bx26, Bx28, Bx29, Bx30, and MTA Bus routes Bx23, Q50, BxM7. These local city buses, with the exception of the BxM7 which is an express bus to Manhattan, connect Co-op City with subway services. While there are no subway or commuter rail stations in Co-op City (a plan to extend the 6 <6> trains of the IRT Pelham Line to Co-op City in the 1970s ran out of money), the MTA is planning to extend Metro-North Railroad service to Penn Station, and included in that plan is a station at Co-op City, an idea that has been proposed since the 1970s. 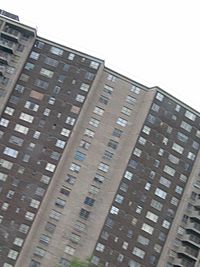 All content from Kiddle encyclopedia articles (including the article images and facts) can be freely used under Attribution-ShareAlike license, unless stated otherwise. Cite this article:
Co-op City, Bronx Facts for Kids. Kiddle Encyclopedia.