This station was built under the Dual Contracts. It opened on March 3, 1917, as part of an extension of the IRT White Plains Road Line from East 177th Street–East Tremont Avenue to East 219th Street–White Plains Road, providing the Bronx communities of Williamsbridge and Wakefield with access to rapid transit service. Service on the new portion of the line was operated as a four-car shuttle from 177th Street due to the power conditions at the time.

This station was added to the National Register of Historic Places on March 30, 2005. It was renovated in 2007 at a cost of $18.85 million. At the same time, another project was undertaken to install elevators at the station, making it ADA-accessible for $2.43 million. 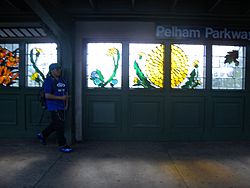 This elevated station has three tracks and two side platforms with the center express track not normally used in revenue service.

Due to the wideness of Pelham Parkway and its service roads, the entire station, including the platform windscreens, canopies, and outer street support columns, is enclosed in concrete over the steel structure. A green trim line runs on top of the windscreens and no columns support the canopies.

This station has two mezzanines, both of which are beneath the tracks and platforms. The full-time one is at the south end and has a staircase and elevator from each platform going down to a waiting area/crossunder, where a turnstile bank provides access to and from the station. The Manhattan-bound platform also has a short, up-only escalator from the station house. Outside fare control, there is a token booth, one staircase and elevator going down to the southwest corner of Pelham Parkway's south service road and White Plains Road, and one up-escalator from the southeast corner of the same intersection. The three elevators make this station fully ADA-accessible.

The north station house, which was renovated in the late 1990s, is unstaffed, containing two staircases from each platform, two more from either northern corners of Pelham Parkway's north service road and White Plains Road, and full height turnstiles.

In 1976, with funding from the Exxon Corporation, this station, as well as three others citywide, received new "artfully humorous graffiti" murals and artwork. Local designer Peter Bradford Associates received $5,000 to repaint the station and put "16 bright posters of animals and parts of animals" on each platform wall, in the theme of the nearby Bronx Zoo.

The current artwork at this station, installed during a 2004-2007 renovation, is called Back to the Garden by Tomie Arai. It consists of stained glass windows on the platform windscreens depicting images of trees and plants, inspired by the nearby zoo and botanical garden.