Fordham is located within Bronx Community Board 5 and Bronx Community Board 7, and its ZIP Codes include 10453, 10457, 10458 and 10468. Its main subway line is the IND Concourse Line (B D trains), operating under the Grand Concourse, with the IRT Jerome Avenue Line (4 train) on its western border. The area is patrolled by the New York City Police Department's 46th Precinct. New York City Housing Authority (NYCHA) property in the area is patrolled by P.S.A. 7 at 737 Melrose Avenue in the Melrose section of the Bronx. The neighborhood is home to the original, Rose Hill campus of Fordham University. 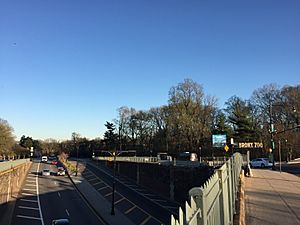 Fordham near New York Botanical Garden and the Bronx Zoo

Fordham has a population of around 43,394 people. Its first growth was in the 1920s, when middle-class and working-class families from Manhattan flocked into the area, attracted by the then-modern housing and convenient subway access by Concourse, Jerome Avenue, and Third/Webster Avenues lines to business districts in Manhattan where they could work and shop. It is now predominantly Latin American and African American. There is a significant historic Italian and Albanian population as well.

The name Fordham was given by John Archer, (a Dutch settler who had anglicized his name, when he established a community at 225th Street near the Harlem River in 1666. Archer owned 2000 acres of land which the English approved for settelment. This was called a Patent, making Archer - Lord of the Manor. Sixteen families established farms in area. Alternatively, Fordham, which meant "house by the ford," originated as either as a reference to its location near a shallow crossing of the Bronx River or as a reference to Rev. John Fordham, an Anglican priest.

The section's origins date back to about 1751, when Fordham Manor was built, on what was called Rose Hill. Most of the estate is part of the Rose Hill Campus of Fordham University. Besides the main manor house and other side buildings on the campus, other historic buildings and noted homes still exist within Old Fordham Village. For example, American poet Edgar Allan Poe spent his final years with his wife Virginia in a cottage in Fordham which is still standing. The nearby Fordham University Church bell is named "old Edgar" and may have been the inspiration for his poem The Bells.

In the 18th century, the Kings Road went through Old Fordham Village, an area of rural estates and small farms, linking Colonial New York and towns and villages north toward Boston. It was a minor rest stop for travelers and coaches, where many springs fed The Mill Brook that crossed this road. During the American Revolution, it was a critical crossing point for Gen. George Washington's Continental Army retreating toward White Plains to safely escape from New York while being chased by the Colonial British and Hessian Forces. There were many American Patriots that lived in this area. After the revolution, the Kings Road was renamed the Boston Post Road, becoming an important thoroughfare for a growing new nation.

In the 19th century, with the building of the White Plains Line (later the Harlem Line of the New York Central Railroad) and a small station, Old Fordham Village began to grow. Local farmers and dairymen were now able to use the railroad to send their products to a growing New York City. North of the village, part of the Mill Brook was dammed up, and a large pond and ice house was built for shipping and cold storage. It provided fresh ice for the community and the railroad. It was during this time that wealthy merchant Robert Watt gave most of The Rose Hill Estate, east of the village, to a Roman Catholic order, the Society of Jesus. It became known as St. John's College and Hospital and was the precursor of Fordham University. A small south-west portion of the former Rose Hill Estate is known today as Rose Hill Park. West of the village, on the other side of Fordham Hill, the Bathgate Estate was built; it was later acquired by wealthy stock speculator Leonard Jerome. He built the Jerome Park Racetrack, where the first Belmont Stakes was held, on his estate. West of the station in the village area, the Fordham Hotel and Taverine would provide basic needs for visitors for the college and the racetrack. 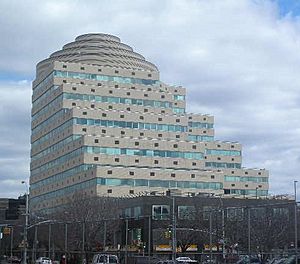 For the most part, Old Fordham Village remained rural until about 1900, when New York City began to expand. Early mass transit to the suburbs changed the area of what is Fordham today. Old Fordham Village and the surrounding area would become part of the borough of the Bronx within New York City. Many of the remaining farms and estates were sold to developers who built houses and sizable apartment buildings. The formerly quiet little village became a major business and transportation hub. In this area of Fordham, Boston Post Road was renamed Fordham Road and became part of U.S. Route 1 in 1926. The rebuilding of the railroad right of way at Fordham, and most of Webster Avenue, eliminated The Mill Brook and water pond, but the side streets of Old Fordham Village remain active.

Fordham was a predominantly middle class White (of Irish and Jewish origins) neighborhood, from the 1920s through the late 1970s, when many families moved to the suburbs or the Los Angeles area, or retired to Florida. Belmont was formerly a portion of Fordham and South Fordham. 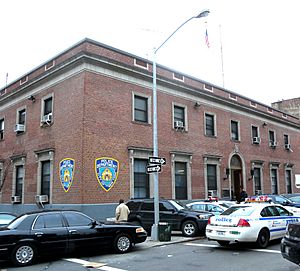 Fordham is dominated by 5- and 6-story apartment buildings, often set flush to the sidewalk. Many of the apartments on the Grand Concourse are taller.

The New York Botanical Garden and the Wildlife Conservation Society's Bronx Zoo, both inside Bronx Park, collectively occupy dozens of acres of land within the neighborhood.

Fordham University maintains its historic original campus on much of the former Rose Hill Manor in the center of the neighborhood. It is one of the largest "green" campuses in New York City, and its traditional collegiate gothic architecture often serves as a backdrop for television and film productions.

The Fordham Road Business Improvement District operates on the northern border of the neighborhood. This retail district is the longest in the Bronx. 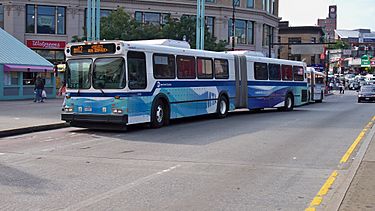 Subway and railroad service is provided by the New York City Subway and Metro-North Railroad, respectively.

The Rose Hill campus of Fordham University, which is the university's oldest campus, is located in Fordham. The campus is home to Fordham College at Rose Hill, the Gabelli School of Business, and a division of the School of Professional and Continuing Studies, as well as the Graduate Schools of Arts and Sciences and Religion and Religious Education.

Monroe College, a private for-profit college, has been located in Fordham since 1967, and is near the Fordham shopping district.

All content from Kiddle encyclopedia articles (including the article images and facts) can be freely used under Attribution-ShareAlike license, unless stated otherwise. Cite this article:
Fordham, Bronx Facts for Kids. Kiddle Encyclopedia.