Mount Vernon is a city in Westchester County, New York, United States. It is an inner suburb of New York City, immediately to the north of the borough of the Bronx. As of the 2010 census, Mount Vernon had a population of 67,292. 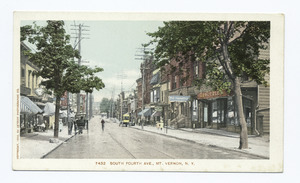 South Fourth Avenue in the 1890s 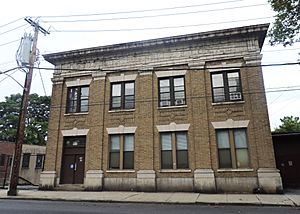 In 1894, the voters of Mount Vernon (and nearby Yonkers) voted, along with the voters of Kings County (present day Brooklyn), Queens County, and Richmond County (present day Staten Island), in a referendum on whether or not they wanted to become part of a "Greater New York City". While the results were positive elsewhere, the returns were so negative in Mount Vernon and Yonkers that those two areas were not included in the consolidated city and remained independent.

The Mount Vernon Public Library, a gift to the city from Andrew Carnegie, opened in 1904 and is now part of the Westchester Library System, providing educational, cultural and computer services to county residents of all ages.

During the 1960s, Mount Vernon was a divided city on the brink of a "northern style" segregation. Many blacks from the southern United States migrated north and settled in the city of Mount Vernon for better job opportunities and educational advancements. At the same time, many white Americans from the Bronx and Manhattan looked to Mount Vernon as a new "bedroom community" due to rising crime in New York City (a "white flight" factor entailed as well). As a result, Mount Vernon became divided in two by the New Haven Line railroad tracks of the Metro-North Railroad: Northside and Southside. The population south of the tracks became predominantly black, while that north of the tracks was largely white.

At the height of this segregation in the 1970s, August Petrillo was mayor. When he died, Thomas E. Sharpe was elected mayor. Upon Sharpe's death in 1984, Carmella Iaboni took office as "acting mayor" until Ronald Blackwood was elected; Blackwood was the first Afro-Caribbean mayor of the city (as well as of any city in New York State). In 1996, Ernest D. Davis was elected the mayor of Mount Vernon; he served until 2007. Clinton I. Young, Jr. became the city's mayor on January 1, 2008. Four years later, on January 1, 2012, Ernest D. Davis became the 21st mayor of Mount Vernon. In 2013, Davis was investigated for failure to report rental income. In 2015, Richard Thomas ran against Davis (and several other opponents) and defeated him in an upset victory during the September primary. Thomas had to run again in the November general election, where he received 71% of the votes to become the next Mayor of Mount Vernon.

Mount Vernon has in recent years undergone a transition from a city of homes and small businesses to a city of regional commerce. Between 2000 and 2006, the city of Mount Vernon's economy grew 20.5%, making it one of the fastest-growing cities in the New York metropolitan area.

Mount Vernon sites included on the National Register of Historic Places include: 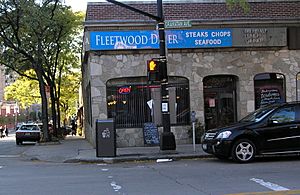 The corner of Gramatan and Grand Avenues in Fleetwood

Mount Vernon is bordered by the village of Bronxville and city of New Rochelle to the north, by the town of Pelham and village of Pelham Manor to the east, by the Hutchinson River and the Eastchester and Wakefield sections of the Bronx to the south, and by the city of Yonkers and the Bronx River to the west.

Mount Vernon's elevation at City Hall is about 235 feet (72 m), reflecting its location between the Bronx River to the west and the Hutchinson River to the east. On a clear day, the Throgs Neck Bridge can be seen from 10 miles (20 km) away from many parts of the city, while at night, the bridge's lights can also be seen. The city's seal, created in 1892, depicts what were then considered the highest points in Mount Vernon: Trinity Place near Fourth Street, Vista Place at Barnes Avenue, and North 10th Street between Washington and Jefferson places. Since then, it was discovered that the city's highest elevation is on New York Route 22, North Columbus Avenue, at the Bronxville line. 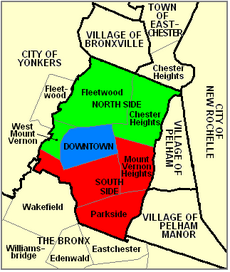 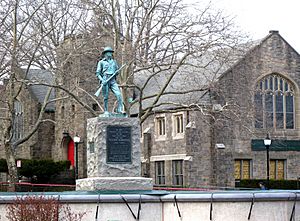 The Circle at Lincoln and Gramatan Avenues

Downtown Mount Vernon features the Gramatan Avenue and Fourth Avenue shopping district (known as "The Avenue" by locals) and the Petrillo Plaza transit hub, and houses the city's central government.

Downtown is in the same condition it was 40 years ago. It features the same mid-century architecture and format. Former mayor Clinton Young vowed to make Mount Vernon a new epicenter with a new central business district. His failed plans included establishing commercial office space and rezoning to allow high density development in the downtown, as well as affordable and market rate housing.

Mount Vernon Heights' highly elevated terrain has earned the moniker "the rolling hills of homes". It is home to the city's commercial corridor, along Sandford Boulevard (6th Street).

Sandford Blvd (6th Street)—also known as "Sandford Square"—is a certified commercial corridor, which anchors businesses such as Bed Bath & Beyond, Best Buy, Colonial Plaza (a strip mall), CVS Pharmacy, Famous Footwear, Hooperstown, Petco, Restaurant Depot, Staples, Stop and Shop, and Target. Sandford Square attracts residents from Mount Vernon, nearby communities in Westchester County and the Bronx, and shoppers from as far away as Connecticut via the Merrit Parkway and I-95, which merge onto the Hutchinson River Parkway.

Most of the commercial development in this corridor has occurred since the 1980s. The area is still undergoing revitalization to encourage economic development within this 400-acre (1.6 km2) of land along and around the boulevard. 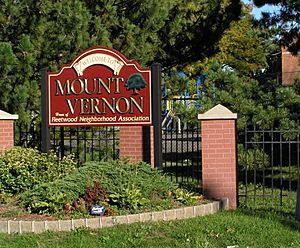 Mount Vernon's North Side is one of the most ethnically diverse neighborhoods in Westchester County. The northern part of the city consists of five neighborhoods: Chester Heights, Estate Manor/Aubyn Estates, Fleetwood, Huntswood, and Oakwood Heights. In Fleetwood, many large co-op buildings line the center of town, which is bisected by Gramatan Avenue. The Huntswood and Estates sections are more affluent areas on the border between Mount Vernon and the Village of Bronxville, with property values ranging from high $400,000 to millions of dollars for single houses. 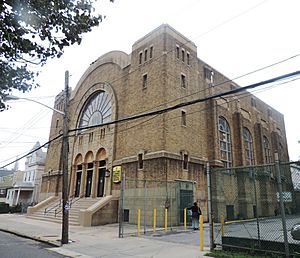 Church in South Side

Mount Vernon's South Side, which abuts the The Bronx, resembles New York City and includes the neighborhoods Parkside, South Side and Vernon Park. Numerous industrial businesses are in Parkside, while the rest of South Side Mount Vernon features multi-family homes, apartment buildings, commercial businesses and housing projects.

South Side Mount Vernon features notable city landmarks such as Brush Park, Hutchinson Field, the Boys and Girls Club, and St. Paul's Church National Historic Site. NBA basketball player Ben Gordon, who is from the South Side, has dedicated two playgrounds to the city: one on South Eighth Avenue, and the other at the Mount Vernon YMCA Family Center. 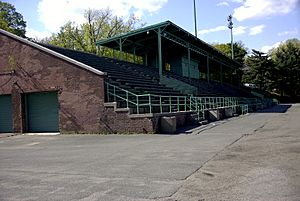 The grandstand at Memorial Field

The city limits contain a number of city parks large and small, and Willson's Woods Park, a 23-acre (93,000 m2) county-owned park. One of the oldest parks in the county system, Willson's Woods offers a wave pool, water slides, and a spray deck and water playground, against the backdrop of an English Tudor style bathhouse. The park also has areas for picnicking and fishing.

Straddling the Fleetwood-Chester Heights border is Hunt's Woods, a county preserve taken over by the city in 1967. It is a small stretch of open woods with hiking and nature trails.

The grounds of Hutchinson Field, on the southbound side of the Hutchinson River Parkway, include many outdoor minor-league fields and a batting cage, as well as the Ice Hutch, a domed sports complex where ice hockey is played indoors during the winter and indoor golf and tennis are available year-round.

Adjacent to Hutchinson Field is the stadium-like Memorial Field, which contains a track for running, a soccer/football field, and a tennis court. Memorial Field is currently closed and awaiting renovations.

Hooperstown, a sports facility on Sanford Boulevard (at 6th Street), contracts basketball-court time to teams and leagues and use of the facility for baseball clinics. It also rents the facility to other businesses that may offer one-on-one training or fitness camps. It is not yet open to the public.

Numerous events take place in Mount Vernon during the year, both indoors and outdoors. The city hosts many annual events, such as a Memorial Day parade, Ben Gordon Day (inspired by the NBA basketballer) in August, the Arts on Third Festival in September, and a Veterans Day parade.

Memorial Field in Mount Vernon was used to film the classic "Mean Joe Greene" Coca-Cola commercial in May 1979.

Multiple movies have been set in or featured Mount Vernon, such as:

Scenes from multiple TV shows have been shot in Mount Vernon, such as:

All content from Kiddle encyclopedia articles (including the article images and facts) can be freely used under Attribution-ShareAlike license, unless stated otherwise. Cite this article:
Mount Vernon, New York Facts for Kids. Kiddle Encyclopedia.