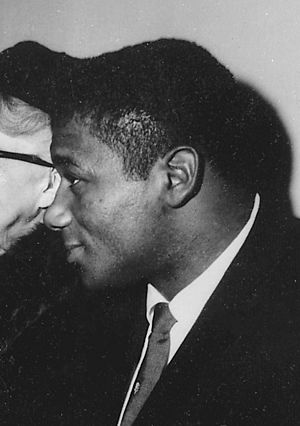 Patterson's amateur record was 44-4 with 37 knockouts. He began fighting as a middleweight and moved to the light heavyweight division. Patterson's first loss was to Joey Maxim in 1954. In January 1956, Patterson married Sandra Hicks. She was his wife until 1969. Their marriage ended because Patterson did not want to quit boxing.

After Rocky Marciano retired, Floyd began aiming at a shot for the vacant heavyweight title. On November 30, 1956, Patterson had two very good things happen in his life. His wife gave birth to his first child, and he beat Archie Moore to become the heavyweight champion of the world. He became the youngest boxing champion ever. He lost the title in 1959 to Ingemar Johanson but he regained it in 1960. In 1962, he lost it again to Sonny Liston. Patterson tried to regain the title two more times from Muhammad Ali in 1965 and 1972. In 1965, he fought for 12 rounds, but on both tries, he failed to win title.

Patterson is remembered as the first man to win back boxing heavyweight championship. All other champions before him failed.

All content from Kiddle encyclopedia articles (including the article images and facts) can be freely used under Attribution-ShareAlike license, unless stated otherwise. Cite this article:
Floyd Patterson Facts for Kids. Kiddle Encyclopedia.