New Paltz is located within the town of New Paltz. It is also home to the State University of New York at New Paltz, founded in 1828. The town is served by exit 18 on the New York State Thruway (I-87), as well as state routes 299, 32, and 208, and is about 90 minutes from both New York City and Albany. 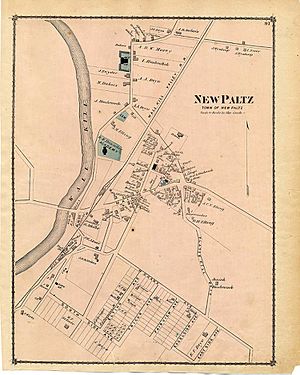 An 1875 map of the Town of New Paltz; the village was created in the central portion

New Paltz was founded in 1678 by French Huguenots settlers, including Louis DuBois, who had taken refuge in Mannheim, Germany, for a brief period of time, being married there in 1655, before emigrating to the Dutch colony of New Netherland in 1660 with his family. Mannheim was a major town of the Palatinate (in German, the Pfalz), at the time a center of Protestantism. The settlers lived in Wiltwyck (present day Kingston, NY) and in 1677 purchased a patent for the land surrounding present day New Paltz from a Lenape tribe known as the Esopus.

The people of Mannheim use a dialect form of the name Pfalz without the "f", pronouncing it "Paltz." Records of the New Paltz Reformed Church, which was formed in 1683, show the name of the settlement was first expressed not in German, nor in English, but in French: Nouveau Palatinat. The community was governed by a kind of corporation called the Duzine, referring to the twelve partners who acquired the royal patent. That form of government continued well past the time of the American Revolution, by special action of the New York State legislature.

The 40,000 acres (16,000 ha) or so of the patent, stretching to the Hudson River and augmented soon by the other patents on the south, were eventually divided among those twelve partners, their relatives, and a few friends into large plots – part wilderness and part farm. The farms were grouped principally around the heights west and east of the Wallkill River. The commercial center serving the agricultural base was located on the east shore of the Wallkill River, in the area where the first settlers had built their shelters. The street is now known as Huguenot Street.

Stone houses of Historic Huguenot Street in New Paltz. They are among the surviving examples of early stone houses built by Europeans in North America.

There, the church, schools, blacksmith, seamstresses, and stores flourished for the benefit of farmers who required goods such as seed, tools, clothing, and food not available on all farms, including alcoholic beverages. The church, which was also used as a school, was located here. Many of the buildings still stand today, as a living museum community.

Population slowly spread from the Wallkill up along the street now known as North Front Street and then along what is now Chestnut Street. In the nineteenth century, development continued along what is now Main Street. The secession of the Town of Lloyd and parts of Shawangunk, Esopus, and Gardiner, between 1843 and 1853, reduced New Paltz to its present size. In 1887, the Village of New Paltz was incorporated within a town of the same name.

Higher education has been one of the main concerns of the community since the 1830s, with facilities on Huguenot Street and North Front Streets. Late in the nineteenth century, the college was built in the area of Plattekill Avenue and Manheim Boulevard, where the State University of New York at New Paltz now stands.

The Wallkill Valley Railroad reached New Paltz by 1870, and provided passenger service through the town until 1937. After the rail line's closure in 1977, the section of the corridor running through New Paltz was converted to the Wallkill Valley Rail Trail, and the former train station in New Paltz was renovated as a restaurant, La Stazione. Many different types of restaurants are located in New Paltz, including several that have earned high ratings from both local and national critics, making it a destination for those seeking a variety of good food.

The Wallkill River runs north along the western border of New Paltz, flowing into the Rondout Creek and eventually the Hudson River.

There were 1,898 households, out of which 12.9% had children under the age of 18 living with them, 21.1% were married couples living together, 7.3% had a female householder with no husband present, and 69.1% were non-families. 41.1% of all households were made up of individuals, and 7.2% had someone living alone who was 65 years of age or older. The average household size was 2.03 and the average family size was 2.66. 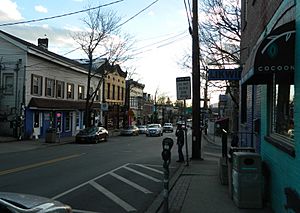 This event, sponsored by the Village, Town, and SUNY New Paltz, celebrates the differences among people through food, spoken word poetry, artistic endeavors and theatrical performance. The 2007 theme was derived from Dr. Seuss's story about Sneetches.

Haunted Hasbrouck Park
For over a quarter of a century the Guenther family put on a free haunted house for area residents, which attracted thousands of visitors on Halloween night. After complaints about traffic and noise concerns, owners Ann and Dan Guenther announced in 2006 that they would no longer create the attraction. However, interest continued, and the attraction was relocated to Hasbrouck Park in 2007, utilizing the park's castle playground as a centerpiece. This move also increased community involvement for the event, drawing upon the local YMCA, Department of Public Works, and volunteers from the area.

Halloween Parade
The Village hosts an annual Halloween parade, open to all residents, on Halloween night.

Night of 100 Pumpkins
Since 1990 local eatery The Bakery has hosted this pumpkin carving contest, which had over 2000 attendees in 2006.

New Paltz hosts an annual Gay Pride Parade that draws participants and spectators from many far off places.

New Paltz is exit 18 on the New York State Thruway, which is also designated as Interstate 87.

There is frequent bus service between The Port Authority Bus Terminal in New York City and New Paltz provided by Trailways of New York, with connections to many other villages and cities in New York State. Express bus service is also available from New Paltz to New York City via Trailways of New York, serving the park-ride lot at Exit 18 of the Thruway. Ulster County Area Transit also provides service to Metro-North Railroad in Poughkeepsie, along with local bus service to Kingston, Newburgh, and points in between along Route 32. In January 2009 the New Paltz Loop Bus, stopping at points throughout the community, was launched.

Stewart International Airport is the nearest major airport to New Paltz. It is located in Newburgh, thirty minutes to the south. 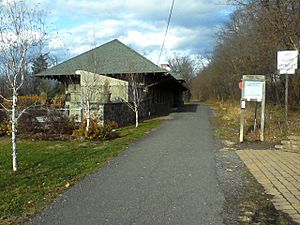 The former station, La Stazione, as viewed from the Wallkill Valley Rail Trail

The Wallkill Valley Railroad, founded in 1866, stretched from Montgomery to Kingston. It later came under New York Central ownership; it was abandoned by Conrail in 1983. The former roadbed was converted for use as the Wallkill Valley Rail Trail The former New Paltz railroad station, (now called La Stazione) was originally built in 1870, rebuilt after a 1907 fire, and sold to private interests in 1959. The building was in a state of disrepair by the early 1980s, but renovated in 1988 and converted to an Italian restaurant in 1999.

The nearest active railroad station is the Poughkeepsie Metro-North station, which is served by several Amtrak trains and is the terminus for the Metro-North Railroad's Hudson Line. The Hudson Line stretches from Poughkeepsie to Grand Central Terminal in New York City. Poughkeepsie is a 15-20 minute drive east of New Paltz.

In 2006, the Town and Village paid for a transportation study to analyze the transportation needs of the area. The study's suggestions included turning Main Street into a one-way route and improving bicycle and pedestrian access. An implementation committee was appointed in 2007 to study ways to use the plan.

All content from Kiddle encyclopedia articles (including the article images and facts) can be freely used under Attribution-ShareAlike license, unless stated otherwise. Cite this article:
New Paltz (village), New York Facts for Kids. Kiddle Encyclopedia.