Peter Hayden Dinklage (born June 11, 1969) is an American actor and producer. Dinklage studied acting at Bennington College, starring in a number of amateur stage productions. His film debut was in Living in Oblivion (1995) and his breakthrough came with the comedy-drama The Station Agent (2003). He has since appeared in Elf (2003), Find Me Guilty (2006), Underdog (2007), Death at a Funeral (2007), Penelope (2008), The Chronicles of Narnia: Prince Caspian (2008), X-Men: Days of Future Past (2014), Pixels (2015), and Three Billboards Outside Ebbing, Missouri (2017), which earned him his first Screen Actors Guild Award. In 2018, he appeared as Eitri in the Marvel Cinematic Universe film Avengers: Infinity War and Hervé Villechaize in the biopic film My Dinner with Hervé.

Dinklage received universal acclaim for portraying Tyrion Lannister on the HBO television series Game of Thrones, for which he won three Primetime Emmys from seven nominations. He also received a Golden Globe for the role in 2011. 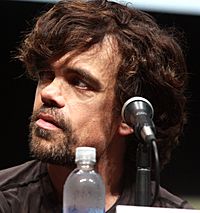 Dinklage at the San Diego Comic-Con in 2013

In 2005, Dinklage married Erica Schmidt, a theater director. The name of their daughter, born in 2011, has not been revealed publicly, and Dinklage has denied media reports that the girl's name is "Zelig." Dinklage and Schmidt had a second child in 2017. The couple never revealed the name or sex of this second child.

Dinklage has a form of dwarfism, achondroplasia, which affects bone growth. As a result, he is 4 feet 5 inches (135 cm) tall, with an average-sized head and torso but shorter than average limbs. While Dinklage has come to accept his condition, he sometimes found it challenging when growing up. Despite his own sentiment about the matter, Dinklage has been viewed as a role model for people sharing his condition. 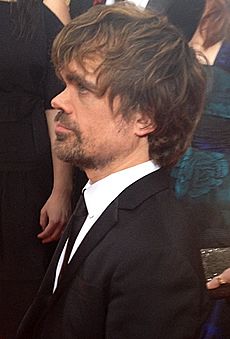 All content from Kiddle encyclopedia articles (including the article images and facts) can be freely used under Attribution-ShareAlike license, unless stated otherwise. Cite this article:
Peter Dinklage Facts for Kids. Kiddle Encyclopedia.