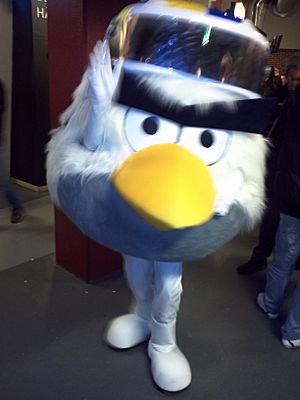 Angry Birds is a puzzle video game developed by Rovio Mobile from Finland. In the game there are wingless birds. The player uses a slingshot to launch them at pigs that are on or in different structures. The player has to destroy all the pigs in the map to unlock another level. A spin off game, in which you play as the pigs, was also released called Bad Piggies.

There are several kinds of wingless birds and green pigs in Angry Birds:

Rovio Mobile has supported their games with many free updates that add more features and levels. There are 7 themed groups of levels. Every group has a simple story, the pigs stole the birds’ eggs so they try to get them back.The birds eventually get the eggs back in every part.

Types of Pigs (strongest to weakest):

The first version of this game was released in December 2009 for Apple’s mobile operating system iOS (iPhone, iPad, iPod Touch). That release was a huge success so they decided to make versions for other mobile platforms (Maemo, webOS, Android, Symbian, Series 40 and Windows Phone). They also made versions even for computer operating systems (Mac OS, Windows) and gaming consoles (PlayStation, Xbox 360). There is also a version for Google’s social network Google Plus.

From December 2009 to November 2011 people downloaded more than 500 million copies of this game. It is the number one game in 79 countries. People played 266 billion levels and shot 400 billion birds. They played 200,000 years of Angry Birds in total and 300 million minutes daily.

All content from Kiddle encyclopedia articles (including the article images and facts) can be freely used under Attribution-ShareAlike license, unless stated otherwise. Cite this article:
Angry Birds Facts for Kids. Kiddle Encyclopedia.