Kids Encyclopedia Facts
This page is about the city. For the nearby town named Kingston, see Kingston (town), New York.

Kingston /ˈkɪŋstən/ is a city in and the county seat of Ulster County, New York, United States. It is 91 miles (146 km) north of New York City and 59 miles (95 km) south of Albany. It became New York's first capital in 1777, and was burned by the British on October 13, 1777, after the Battles of Saratoga. In the 19th century, the city became an important transport hub after the discovery of natural cement in the region, and had both railroad and canal connections. Passenger rail service has since ceased, and many of the older buildings are part of three historic districts, such as the Stockade District uptown, the Midtown Neighborhood Broadway Corridor, and the Rondout-West Strand Historic District downtown.

As early as 1614 the Dutch had set up a factorij (trading post) at Ponckhockie, at the junction of the Rondout Creek and the Hudson River. The first recorded permanent settler in what would become the city of Kingston, was Thomas Chambers, who came from the area of Rensselaerswyck in 1653. The place was called Esopus after the local Esopus tribe. As more settlers arrived, tensions developed between the Esopus and the Dutch, in part due to the Dutch selling alcohol to the young Esopus men.

In the spring of 1658 Peter Stuyvesant, Director-General of New Amsterdam, arrived and advised the residents that if they wished to remain they must re-locate to high ground and build a stockade. Tensions continued between the Esopus and the settlers, eventually leading to the Esopus Wars. In 1661 the settlement was granted a charter as a separate municipality; Stuyvesant named it Wiltwijck (Wiltwyck). It was not until 1663 that the Dutch ended the four-year conflict with the Esopus through a coalition of Dutch settlers, Wappinger and Mohawk. Wiltwyck was one of three large Hudson River settlements in New Netherland, the other two being Beverwyck, now Albany, and New Amsterdam, now New York City. With the English seizure of New Netherland in 1664, relations between the Dutch settlers and the English soldiers garrisoned there were often strained. In 1669 Wiltwyck was renamed Kingston, in honor of the family seat of Governor Lovelace's mother.

In 1777, Kingston became the first capital of New York. During the summer of 1777, when the New York State constitution was written, New York City was occupied by British troops and Albany (then the second largest settlement in New York and capital of the newly independent State of New York) was under threat of attack by the British. The seat of government was moved to Kingston, which was deemed safer. However, the British never reached Albany, having been stopped at Saratoga, but they did reach Kingston. On October 13, 1777, the city was burned by British troops moving up river from New York City, and disembarking at the mouth of the Rondout Creek at "Ponckhockie". The denizens of Kingston knew of the oncoming fleet. By the time the British arrived, the residents and government officials had removed to Hurley, New York. The area was a major granary for the colonies at the time, so the British burned large amounts of wheat and all but one or two of the buildings. Kingston celebrates and re-enacts the 1777 burning of the city by the British every other year (2017 is the next "burning" of Kingston), in a citywide theatrical staging of the event that begins at the Rondout.

Kingston was incorporated as a village on April 6, 1805. In the early 1800s four sloops plied the river from Kingston to New York. By 1829 steamers made the trip to Manhattan in a little over twelve hours, usually travelling by night. Columbus Point (now known as Kingston Point) was the river landing for Kingston and stage lines ran from the village to the Point. The Dutch cultural influence in Kingston remained strong through the end of the nineteenth century. 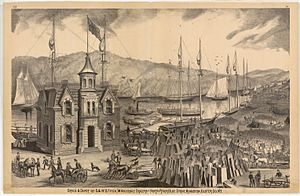 A 19th-century Bluestone shipping depot on the Rondout Creek 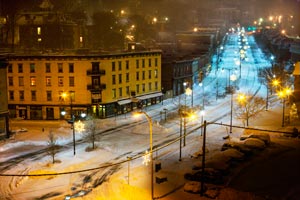 Prior to 1825 Rondout was a small farming village. Construction of the Delaware and Hudson Canal from Rondout to Honesdale, Pennsylvania, brought an influx of laborers. With the completion of the canal in 1828, Rondout became an important tide-ware coal terminal. Natural cement deposits were found throughout the valley, and in 1844 quarrying began in the "Ponchockie" section of Rondout. The Newark Lime and Cement Company shipped cement throughout the United States, a thriving business until the invention of the cheaper, quicker drying Portland Cement. Large warehouses of ice sat beside the Hudson River from which the ice was cut during the winter and preserved all year to be used in early refrigeration. Large brick making factories were also located close to this shipping hub. Rondout's central location as a shipping hub ended with the advent of railroads which ran through Rondout and Kingston but could transport their loads through the city without stopping. 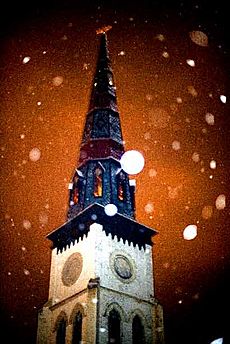 Kingston is home to many historic churches. The oldest church still standing is the First Reformed Protestant Dutch Church of Kingston which was organized in 1659. Referred to as The Old Dutch Church, it is located in Uptown Kingston. Many of the city's historic churches populate Wurts street (6 in one block) among them Hudson Valley Wedding Chapel is a recently restored church built in 1867 and now a chapel hosting weddings. Another church in the Rondout is located at 72 Spring Street. Trinity Evangelical Lutheran Church was founded in 1842. The original church building at the corner of Hunter Street and Ravine Street burned to the ground in the late 1850s. The current church on Spring Street was built in 1874.

St. Joseph's Parish began in 1863 as a one-room mission school to serve the children of the Wilbur area, founded by Father Felix Farrelly, pastor of St. Mary's Parish in Rondout. The building was later sold to the city of Kingston in 1871.

As the chapel was deemed too small, the former Kingston Armory at the corner of Wall and Main Streets was purchased. The new church was dedicated on July 26, 1869. In 1877 Jockey Hill was made a mission of St. Joseph's. In 1962 a mission was established in Hurley.

In 1893 the church underwent a major renovation, including the installation of the side altars. The new church front was completed in 1898. The interior was renovated in 1905.

The frame building on the Bowery was turned into a schoolhouse. This was replaced in 1905 with the acquisition of the former mansion of Judge Alton B. Parker at 1 Pearl Street for a new St. Joseph's School and Convent. The Fair Street school building continued to be used as the parish hall until the property was sold in 1911. Also in 1911 a site for a larger school and convent was secured and 1 Pearl Street was sold. In 1943 the Sisters of St. Ursula replaced the Sisters of Charity at the school.

Wilbur (aka Twaalfskill) was a hamlet upstream from Rondout where the Twaalskill met the Rondout Creek. There was a sloop landing there and it later became the center for the shipment of bluestone to create the sidewalks of New York City.

Kingston officially became a city on May 29, 1872, with the merger of the villages of Rondout and Kingston, and the hamlet of Wilbur.

Kingston has three recognized area neighborhoods. The Uptown Stockade Area, The Midtown Area, and The Downtown Waterfront Area. The Uptown Stockade Stockade District was the first capital of New York State. Meanwhile, the Midtown area is known for its early 20th century industries and plays home to the Ulster Performing Arts Center and the historic City Hall building. The downtown area, once the village of Rondout and now the Rondout-West Strand Historic District, borders the Rondout Creek and is home to recently redeveloped waterfront . The creek empties into the Hudson River through a large, protected tidal area which was the terminus of the Delaware and Hudson Canal, built to haul coal from Pennsylvania to New York City.

Downtown, called "the Rondout" because it was formerly known as Rondout, New York, is an artist community labeled by Business Week online as one of "America's best places for artists." It is home to a large number of art galleries. Kingston holds many festivals in the Rondout neighborhood, including the Kingston Jazz Festival, the Artists Soapbox Derby, and Drum Boogie.

While the Uptown area is noted for its "antique" feeling, the overhangs attached to buildings along Wall and North Front streets were added to historic buildings in the late 1970s and are not authentically part of the 19th century Victorian architecture. The historic covered storefront walks, known as the Pike Plan, were recently reinforced and modernized with skylights. In the Stockade district of Uptown, many 17th century stone buildings remain. Among these is the Senate House, which was built in the 1670s and was used as the state capital during the revolution. Many of these old buildings were burned by the British Oct. 17, 1777, and restored later. A controversial restoration of 1970s-era canopies was marred by the sudden appearance of painted red goats on planters just prior to the neighborhood's rededication. This part of the city is also the location of the Ulster County Office Building.

All content from Kiddle encyclopedia articles (including the article images and facts) can be freely used under Attribution-ShareAlike license, unless stated otherwise. Cite this article:
Kingston, New York Facts for Kids. Kiddle Encyclopedia.