Trailways of New York is one of the largest privately held transportation companies based in New York State. It employs over 450 people and carries passengers more than 80 million miles annually.

Founded in 1926 by the Van Gonsic Berardi family, Trailways of New York first began as the Rip Van Winkle brand with commuter service between New York City and the Hudson Valley. During the 1930s following a series of early successes in the then newly emerging bus industry, service was first extended from its original Hudson Valley and Metro New York home into the Adirondack Region.

Over time, Trailways of New York's holdings grew to include The Dixie Bus Terminal in New York City as well as other properties that support its core business in the Northeastern United States.

Expansion came yet again in the 1990s, marking the companies' largest growth since the first half of the 20th Century. During this time service was expanded to include Long Island and the nearby Canadian Cities of Montreal and Toronto. A long term revenue sharing partnership was also established with Greyhound Bus Lines to provide enhanced service and reliability to the customers of both brands.

In 2010, Darius McCollum was caught behind the wheel of a stolen Trailways NY bus en route to Kennedy Airport. McCollum is best known for his theft of "an E Train filled with passengers from 34th Street to The World Trade Center" when he was only 15 years old. This theft marked McCollum's 27th arrest for a transit related crime. For the theft, he was sentenced to 2 1/2 to 5 years in prison. 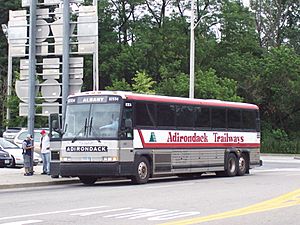 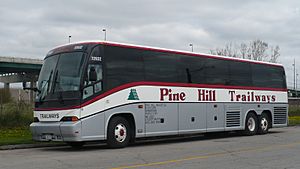 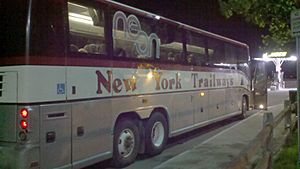 Trailways of New York operates under three brands: Adirondack Trailways, Pine Hill Trailways, and New York Trailways. Until recently, NeOn Bus (from New York - Ontario) had been a separately-branded service which operated between the New Yorker Hotel in Manhattan and the Fairmont Royal York Hotel in Toronto that began on May 29, 2008. Initially it was a limited-stop discount service with fares as low as $1, only calling at key cities such as Syracuse and Buffalo en route, but it later made a variety of other stops. It was a joint service operated by Greyhound Lines, Greyhound Canada, and Trailways of New York.

New York Trailways is the brand used by Passenger Bus Corporation. The following routes are operated by New York Trailways: New York-Binghamton-Syracuse-Rochester-Buffalo, Binghanmton-Ithaca-Rochester, Binghamton-Elmira-Rochester, Elmira-Ithaca-Syracuse, and Syracuse-Canton-Massena. Many of these and other services had previously been operated by Western New York Motor Lines, Inc., which operated under the brand Empire Trailways, prior to their sale to Trailways of New York.

Trailways of New York utilizes the following models in its fleet:

All content from Kiddle encyclopedia articles (including the article images and facts) can be freely used under Attribution-ShareAlike license, unless stated otherwise. Cite this article:
Trailways of New York Facts for Kids. Kiddle Encyclopedia.