Nanuet is a hamlet and census-designated place in the town of Clarkstown, Rockland County, New York, United States. The third largest hamlet in Clarkstown, it is located north of Pearl River, south of New City, east of Spring Valley, and west of West Nyack. It is located midway between Manhattan and Bear Mountain, 19 miles (31 km) north and south of each respectively; and 2 miles (3 km) north of the New Jersey border. It has one of three Rockland County stations on New Jersey Transit's Pascack Valley Line. The population of Nanuet was 17,882 at the 2010 census.

The opening of the New York State Thruway (Interstate 87/287), the Tappan Zee Bridge, and the Palisades Interstate Parkway in the mid-1950s helped usher in decades of population growth and real estate development, including the construction of the Nanuet Mall and local shopping centers.

The first name of the place was Clarkstown, a name it retained until 1856 when, at the suggestion of James De Clark, the present name was given by Munsee Chief (Nannawitt). Chief Nannawitt sold lands in North Jersey, signed the Wawayanda Patent and witnessed the Cheesecock Patent.

Also according to the Times, the Erie Railroad arrived in Rockland County in 1841 along its original main line to Piermont. The New Jersey and New York Railroad, the predecessor of the Pascack Valley Line, reached Nanuet in 1869.

According to the United States Census Bureau, the CDP has a total area of 5.4 square miles (14 km2), all land.

The topography is a result of the massive glaciation of the last Ice Age, and as such the soil is extremely rocky and the surface shows glacial erratic boulders. The glacial ice scraped off and carried with it rocks and minerals from as far north as Canada, depositing them in Nanuet in particular and southern New York in general. This is the hypothesized source of the manganese-rich parvo-mangano-edenite minerals, as well as the placer ore for gold panning within Nauraushaun Brook. There are fossil impressions of huge Precambrian Era jellyfish in the wooded, undeveloped regions. One prominent surface feature, a Hopewell Indian burial mound dating to 325 AD, is located near Nauraushaun Brook at the western edge of the Manhattan Woods Golf Club in West Nyack. Aerial views of this feature reveal it to have been built in the shape of a snake.

Lake Nanuet Park is a pool which is designed to look like a naturally occurring lake. The park which surrounds it offers residents a summer pool and recreational baseball/softball fields. Recent massive flooding and subsequent contamination closed the park for swimming until 2011. 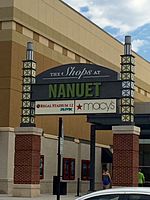 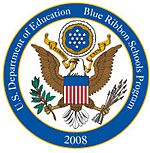 The Rockland County is home to several Blue Ribbon School of Excellence Award winners, awarded by the U.S. Department of Education. In 2016, Nanuet Senior High School was named a National Blue Ribbon winner.

All content from Kiddle encyclopedia articles (including the article images and facts) can be freely used under Attribution-ShareAlike license, unless stated otherwise. Cite this article:
Nanuet, New York Facts for Kids. Kiddle Encyclopedia.