Blauvelt is a hamlet and census-designated place, formerly known as Greenbush and then Blauveltville, in the town of Orangetown, Rockland County, New York, United States. It is located north of Tappan, east of Nauraushaun and Pearl River, south of Central Nyack, and west of Orangeburg. As of the 2010 census, the CDP had a population of 5,689.

There were 1,564 households out of which 38.7% had children under the age of 18 living with them, 71.9% were married couples living together, 8.8% had a female householder with no husband present, and 16.0% were non-families. 13.6% of all households were made up of individuals and 8.2% had someone living alone who was 65 years of age or older. The average household size was 3.08 and the average family size was 3.40. 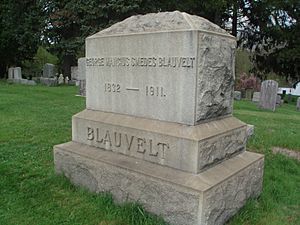 A grave of a Blauvelt

The name "Blauvelt", of Dutch origin, is that of a prominent family that settled in the area in the 17th century. The etymology of the name probably comes from the coat of arms adopted by the first Blauvelt, Pieter Blauwveld, a prominent trader in the Netherlands. Literally, it means "blue-field", or "blue pasture fields", likely a reference to the blue and yellow shields hung on Pieter's ships (a common 14th century Dutch method of identifying the owner). The first Blauvelt in America was a peasant farmer who worked on Kiliaen van Rensselaer's estate cultivating tobacco, in 1638.

In 1909, New York State purchased property in Blauvelt to create Camp Bluefields, a large rifle range used to train members of the New York National Guard prior to World War I. The property was later used by the YWCA, ROTC, Columbia University and the U.S. Army for various purposes before being abandoned following World War II. The land is today the site of Blauvelt State Park.

In 1972, Robert Salvia and Professor Dr. Paul Olson of the Lamont–Doherty Earth Observatory, a research unit of Columbia University located on a 157-acre (0.64 km2) campus in Palisades, New York, discovered several 200-million-year-old dinosaur tracks that were identified as being from the coelophysis. Some of these tracks were sent to the New York State Museum in Albany, New York for identification and preservation. The fossils date from the Triassic period and are claimed to be the only dinosaur tracks ever discovered in the state of New York.

The 914 Sound Studios was a musical recording studio in the 1970s. Several albums were recorded in Blauvelt, including the title track of Bruce Springsteen's album Born to Run in 1974. 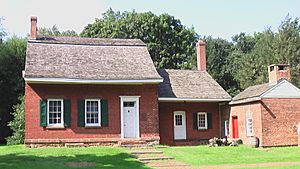 All content from Kiddle encyclopedia articles (including the article images and facts) can be freely used under Attribution-ShareAlike license, unless stated otherwise. Cite this article:
Blauvelt, New York Facts for Kids. Kiddle Encyclopedia.