In 2008, Clarkstown became one of 600 municipalities nationwide to sign the United States Mayor's Climate Protection Agreement to reduce carbon dioxide emissions to 7 percent below the 1990 levels by 2012.

The town of Clarkstown was created in 1791 in Orange County, before Rockland County was formed. 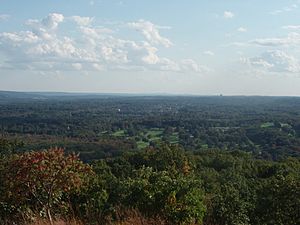 View of the Town of Clarkstown from High Tor Mountain.

The Hudson River defines the eastern border of the town, which is opposite the town of Mount Pleasant in Westchester County.

Clarkstown Mini-Trans is the provider of local mass transportation in Clarkstown. It has five bus routes:

Commuter transportation is provided by New Jersey Transit's Pascack Valley Line at Nanuet, with service to Hoboken and connecting service to New York Penn Station. Tappan ZEExpress, operated by Transport of Rockland provides bus service from the Palisades Center in West Nyack and the Hudson Link bus in Central Nyack to the Tarrytown train station and the White Plains TransCenter. In addition, Rockland Coaches provides express service to the Port Authority Bus Terminal in New York City from Park-and-Ride and other pickup locations in New City, Bardonia, West Nyack, and Nanuet via Route 49 and 49J, and local service to New York from New City, Valley Cottage, and Upper Nyack on Routes 9A, 9T, and 20.

Communities and locations in Clarkstown, NY

In 1994, Clarkstown was involved in litigation that challenged a town ordinance that required all waste picked up in the town to be sorted for recyclables at a specific privately operated facility. The case made it to the United States Supreme Court in C&A Carbone, Inc. v. Town of Clarkstown, in which the ordinance was held unconstitutional.

All content from Kiddle encyclopedia articles (including the article images and facts) can be freely used under Attribution-ShareAlike license, unless stated otherwise. Cite this article:
Clarkstown, New York Facts for Kids. Kiddle Encyclopedia.