Congers is an affluent, suburban hamlet and census-designated place in the town of Clarkstown, Rockland County, New York, United States. It is located north of Valley Cottage, east of New City, across Lake DeForest, south of Haverstraw, and west of the Hudson River. It lies 19 miles (31 km) north of New York City's Bronx boundary. As of the 2010 census, the CDP population was 8,363.

According to the United States Census Bureau, the CDP has a total area of 3.9 square miles (10 km2), of which 3.2 square miles (8.3 km2) is land and 0.7 square miles (1.8 km2) (18.39%) is water. The high percentage of Congers that sits under water is due to the hamlet's emplacement within and between four lakes: Congers Lake, Rockland Lake, Swartwout (also Swarthout) Lake, and the county reservoir, Lake DeForest. Congers is adjacent to Rockland Lake State Park, along the Hudson River. 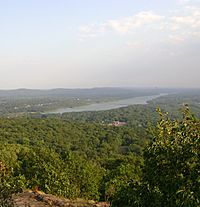 Congers, named after Abraham B. Conger, was settled in the late 17th century by Dutch, German and English settlers and was known as Cedar Grove Corner and then Waldberg, which in German means "forest mountain".

In the 19th century the Congers railroad station, three churches, a school, the firehouse and the Central and Globe hotels were built. The first floor of the then Globe hotel (pictured below) on the southeastern corner of Congers Road is presently the Last Chance Saloon. The Clarktown Dutch Reformed Church still stands at the corner of Congers Road and Kings Highway.

Kings Highway was the first major road in the county and for many years the only road from New York to Albany.

Today there exist nine structures with recognized historical markers dating back to the 18th century, including the DeBaum House on Kings Highway, the Smith House on Gilchrest Road and the Snedeker House, where the Commander-in-chief George Washington is believed to have spent a night.

The Swartout estate which was occupied by George Swartout, was part of a large tract of land confiscated by the government about 1777; It was purchased by General James Swartout who was a collaborator of George Washington, and member of a family which traced its residence in Rockland County to 1660.

DeForest Lake, built in 1955/6, was named after Henry L. Deforest, President of the Spring Valley Works and Supply Company. 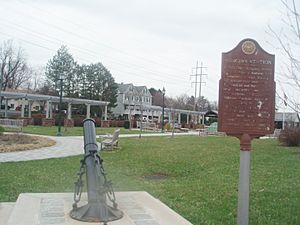 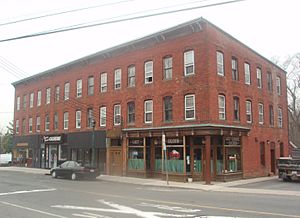 All content from Kiddle encyclopedia articles (including the article images and facts) can be freely used under Attribution-ShareAlike license, unless stated otherwise. Cite this article:
Congers, New York Facts for Kids. Kiddle Encyclopedia.