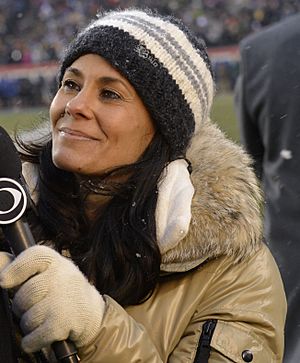 Tracy Wolfson (born March 17, 1975) is an American sportscaster with CBS Sports. She is currently a sideline reporter for SEC on CBS, College basketball on CBS, and a court reporter for tennis on CBS. She does sideline reporting on NBA playoffs for TNT and NFL preseason games for CBS and was a reporter for auto racing. She covered golf, arena football, and college football for ESPN. She is one of the studio hosts for CBS' coverage of NCAA Basketball replacing Sam Ryan. In 2004 she was named one of the "Best New Faces" of the NCAA tournament in the USA Today.

All content from Kiddle encyclopedia articles (including the article images and facts) can be freely used under Attribution-ShareAlike license, unless stated otherwise. Cite this article:
Tracy Wolfson Facts for Kids. Kiddle Encyclopedia.