The first European settlers in Tenafly were Dutch immigrants, who began to populate the area during the late 17th century. The name "Tenafly" itself is derived from the early-modern Dutch phrase "Tiene Vly" or "Ten Swamps" which was given by Dutch settlers in 1688. Other derivations cite a Dutch language connection to its location on a meadow.

Tenafly was incorporated as a borough on January 24, 1894, by an act of the New Jersey Legislature from portions of the now-defunct Palisades Township, based on the results of a referendum held the previous day. The borough was the first formed during the "Boroughitis" phenomenon then sweeping through Bergen County, in which 26 boroughs were formed in the county in 1894 alone. Portions of Palisades Township were acquired based on legislation approved on April 8, 1897.

New Jersey Monthly magazine ranked Tenafly as the 7th best place to live in New Jersey in its 2013 rankings of the "Best Places To Live" in New Jersey.

The borough borders Alpine, Bergenfield, Cresskill, Englewood and Englewood Cliffs, and The Bronx in New York City, across the Hudson River.

Tenafly's street plan and overall development were largely determined by its hills and valleys. The eastern part of the borough is referred to as the "East Hill" for its higher elevation in relation to the rest of the borough. There, the terrain rises dramatically to the east of the downtown area, terminating at the New Jersey Palisades, overlooking the Hudson River. Nearby is the Tenafly Nature Center, located at 313 Hudson Avenue.

There were 4,766 households out of which 49.1% had children under the age of 18 living with them, 72.7% were married couples living together, 8.2% had a female householder with no husband present, and 17.0% were non-families. 15.3% of all households were made up of individuals, and 8.7% had someone living alone who was 65 years of age or older. The average household size was 3.02 and the average family size was 3.36.

The Palisades Interstate Parkway runs above the Hudson River from Englewood Cliffs north towards Alpine. There are no exits on the parkway in Tenafly; the nearest interchanges are Exit 1 in Englewood Cliffs to the south, and Exit 2 in Alpine in the north.

Local and express bus service to and from New York City is available via NJ Transit bus route 166 to and from the Port Authority Bus Terminal in Midtown Manhattan. 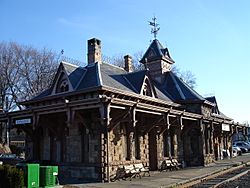 From the mid 1850s until September 1966, Tenafly was served by rail along the Northern Branch, originally to Pavonia Terminal, and later to Hoboken Terminal. CSX now provides freight service along the line. The former Tenafly Station, currently a restaurant, was added to the National Register of Historic Places in 1979; it is one of four surviving stations on the Northern Branch.

The Northern Branch Corridor Project, a proposal by New Jersey Transit to extend the Hudson Bergen Light Rail for nine stops and 11 miles (18 km) northward from its current terminus in North Bergen to two stations in Tenafly, the last of which would be a new terminus near the Cresskill town line, met with mixed reactions. Many residents and officials believed that the negative impact on the borough in terms of traffic and noise outweighed the benefits. In November 2010, voters rejected the plan to re-establish rail service to the town by a nearly 2-1 ratio in a non-binding referendum, with all of the borough council candidates opposing the restoration of commuter train service. There is continued resistance to New Jersey Transit's preferred alternative as described in the plan's December 2011 announcement. Despite local opposition, officials in Bergen County asked the North Jersey Transportation Planning Authority to support the proposal. In 2013, New Jersey Transit announced that the line would end in Englewood, after Tenafly officials estimated that as much in $8 million in commercial property valuation would be lost and residents raised strong objections.

Historic locations in Tenafly include:

All content from Kiddle encyclopedia articles (including the article images and facts) can be freely used under Attribution-ShareAlike license, unless stated otherwise. Cite this article:
Tenafly, New Jersey Facts for Kids. Kiddle Encyclopedia.