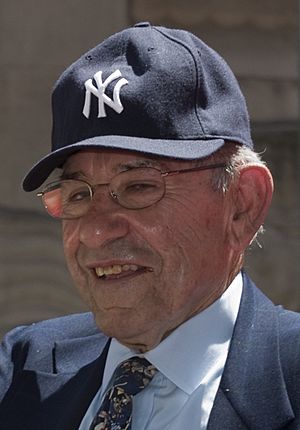 He is said to be one of the best catchers in baseball history. He was added to the Baseball Hall of Fame in 1972. He was well known for his quotes, including "It ain't over 'til it's over." Berra sued Hanna-Barbera for defamation over the character Yogi Bear, but later withdrew the lawsuit.

Berra was born in St. Louis, Missouri. His parents were Italian immigrants. He married his wife Carmen on January 26, 1949. They had three sons, including Dale Berra. Carmen died from a stroke on March 6, 2014. She was 88 years old.

Berra died from natural causes on September 22, 2015 in Montclair, New Jersey, aged 90. His remains were cremated and later buried at a cemetery in New Jersey.

All content from Kiddle encyclopedia articles (including the article images and facts) can be freely used under Attribution-ShareAlike license, unless stated otherwise. Cite this article:
Yogi Berra Facts for Kids. Kiddle Encyclopedia.