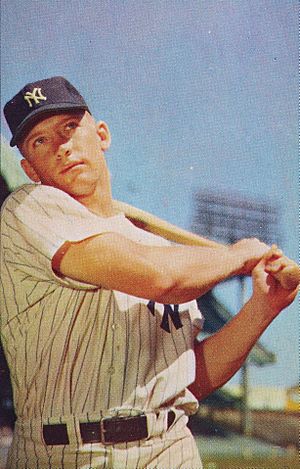 Mickey Charles Mantle (October 20, 1931 – August 13, 1995) was an American baseball centerfielder. He played 18 seasons in Major League Baseball (from 1951 to 1968) for the New York Yankees. Mantle is considered to be the greatest switch hitter of all time. He was inducted into the National Baseball Hall of Fame in 1974. He was born in Spavinaw, Oklahoma. He played on 7 champion Yankees teams. He also hit 16 World Series home runs, and held the record for most home runs in Yankee Stadium for many years. He was elected to the Major League Baseball All-Century Team in 1999. His three closest teammates were Joe DiMaggio, Roger Maris and Whitey Ford. He was an alcoholic. He had hepatitis C and died in Dallas, Texas from liver cancer.

His nicknames included The Mick, The Commerce Comet, and Muscles. "The Commerce Comet" is a reference to Mantle's days spent working in the coal mines of Commerce, Oklahoma. As a result of this work, Mantle grew incredibly strong, which led to the nickname "Muscles".

All content from Kiddle encyclopedia articles (including the article images and facts) can be freely used under Attribution-ShareAlike license, unless stated otherwise. Cite this article:
Mickey Mantle Facts for Kids. Kiddle Encyclopedia.