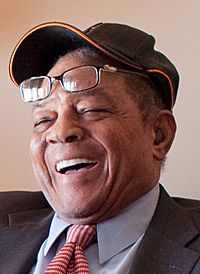 Willie Howard Mays, Jr. (born May 6, 1931), nicknamed "The Say Hey Kid" is a retired American Major League Baseball (MLB) center fielder. He spent almost all of his 22 season career playing for the New York and San Francisco Giants before finishing with the New York Mets. His career began in 1951 and he retired in 1973.

Mays was born in Westfield, Alabama, near Bessemer, Alabama.

All content from Kiddle encyclopedia articles (including the article images and facts) can be freely used under Attribution-ShareAlike license, unless stated otherwise. Cite this article:
Willie Mays Facts for Kids. Kiddle Encyclopedia.