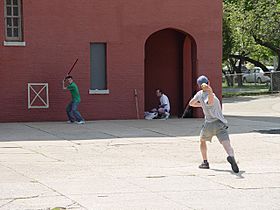 Stickball is a street game related to baseball, usually formed as a pick-up game played in large cities in the Northeastern United States, especially New York City and Philadelphia. The equipment consists of a broom handle and a rubber ball, typically a spaldeen, pensy pinky, high bouncer or tennis ball. The rules come from baseball and are modified to fit the situation. For example, a manhole cover may be used as a base, or buildings for foul lines. The game is a variation of stick and ball games dating back to at least the 1750s. This game was widely popular among youths growing up from the 20th century until the 1980s. 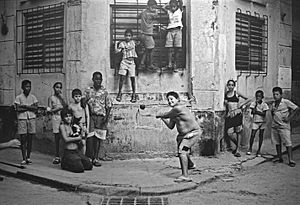 There are three styles of stickball with various methods of pitching.

The batter is out if the ball is caught on the fly; there are other ways to be out, depending on local rules. If the ball lands on a roof, porch or breaks a window far away, it is usually ruled a home run. Hits are decided by how far the ball travels. In some versions of stickball there is no running, but in most leagues, such as the New York Emperors Stickball League, the batter must run the bases just like in baseball.

When the game is played in more confined environments such as across a road (where the batter is positioned at a strike zone drawn on a building and the pitcher delivers from across the street), there is usually no running. Singles, doubles, triples, and home runs are determined by the level at which the ball hits the building across the street, with a ball hit onto a roof top being a home run. Ground balls caught after one bounce are generally ruled as an out, as well as pop ups caught in the air.

Boston variations of stickball usually replace a broomstick with a cut hockey stick, allowing a little more 'pop' on the ball if hit correctly. Also, when playing slow pitch, the ball is not necessarily bounced while pitched. A 'loaded wiffle bat', consisting of a Wiffle bat sawed-off and filled with wet newspaper or superballs then wrapped in heavy-duty tape to hold it together, is also popular in the North Shore suburbs. "Monkey ball" is also usually allowed in slow pitch, allowing fielders to throw the ball at baserunners, eliminating the need to tag a base to get a runner out. "Pitchers poison" is a variant that allows fielders to throw the ball to the pitcher standing on the mound instead of throwing it to a first basemen.

Burby (also known as fast-pitch stickball) is a game believed to have its roots in Toronto in the late 1970s and early 1980s. Spun off from baseball and closely related to the American game of stickball, the name burby may be derived from the fact that it is a sport born out of the suburbs. Burby is typically played with a wooden bat and tennis balls.}

Many Native American cultures in what is now the eastern United States played a stickball-like game that is the ancestor of modern-day lacrosse, using hickory sticks and a ball made of deer hair or hide.

All content from Kiddle encyclopedia articles (including the article images and facts) can be freely used under Attribution-ShareAlike license, unless stated otherwise. Cite this article:
Stickball Facts for Kids. Kiddle Encyclopedia.