Prior to its incorporation into the city proper, North Philadelphia was little more than a collection of primarily agricultural townships above the original City of Philadelphia. In the 18th century, as Philadelphia grew in importance and, consequently, population, then pastoral North Philadelphia became an attractive alternative to the burgeoning city. The mansions of wealthy Philadelphians began to dot the landscape, and by the late 18th and early 19th century, several small town centers had developed to anchor the growing population. However, this suburban landscape was to be interrupted around the middle of the 19th century, as rapid urban expansion led to The Consolidation Act of 1854. This state law annexed all of the townships within Philadelphia County to the City of Philadelphia. With new territory now under the aegis of Philadelphia's city planners, and a rising influx of European immigrants, led to the end of North as a suburb of Philadelphia. North Philadelphia's decentralized towns were gradually meshed into a sprawling network of the ubiquitous Philadelphia rowhome. Many of the newly created neighborhoods retained the name of their ancestral towns and townships, for example, Northern Liberties was formerly Northern Liberties Township. 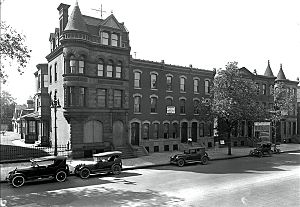 Philadelphia was one of the more important centers of manufacturing in the world between the mid-19th and mid-20th centuries, and North Philadelphia is one of the sections of the city whose landscape was most deeply shaped by the industrial era. Its landscape still strongly reflects this heritage.

As the industrial age peaked in America, North Philadelphia became a working man's town. Upper North Philadelphia, Olney, Brewerytown, became major hubs of production. Large factories and industrial complexes were erected, covering vast swaths of city land. Thousands of rowhomes were constructed to house the burgeoning worker population. This expansion was also the impetus for breaking ground on the Broad Street Line subway; designed specifically to carry a passenger from the northern hub of Olney to Philadelphia City Hall in under 20 minutes. Major freight and passenger rail lines were built to intersect at the newly constructed North Broad Street Station, and transmit cargo from the bustling factories. The completion of the BSL these major railways made the region a thriving hub of transportation. For a time, North Philadelphia station became the second most heavily trafficked rail station in the city, and the Olney Ave station the most used subway stop.

Along with many of Philadelphia's major manufacturing concerns came the nearby estates of the wealthy industrialists who had founded them. Lower North Philadelphia in particular housed a number of the nouveau riche; ambitious first or second generation immigrants or those that had made their fortunes starting manufacturing firms. Many were German Jews that had settled in the area, later founding companies and building synagogues. For a time, an age of opulence and grand architecture returned to North Philadelphia, centered on what is now zoned as the Historic North Broad Street Mansion and Speculative Housing Districts. Gentlemen's Clubs, upscale restaurants and shopping districts grew in this southern tier for a brief moment in history, peaking in the late 1920s. Upper-class foremen and executives lived farther north along Broad Street, in what is now the West Diamond Street Townhouse Historic District. Thriving commercial districts sprung up along the great northern avenues; Columbia (renamed Cecil B. Moore Avenue), Susquehanna, Dauphin, Erie, Lehigh and Olney, to name a few. However, just as this wealth was so suddenly gained, it would just as suddenly be lost. The new money culture proved to be an unstable foundation for a lasting community, and like so many constructs of the Gilded Age, this core of wealth was doomed to rot.

Over the next few decades The Great Depression, outsourcing, and white flight took their toll on North Philadelphia in a fashion similar to other major US cities of the mid to late 20th century, if not in a more pronounced fashion. While residential corridors like Hope Street and Delhi Street had long housed primarily African-American residents, white residents moved out of the city as waves of poor blacks moved in. During the 40s and 50s, much of the area was racially integrated, although smaller streets were usually completely black or white. Whites began to move out slowly at first in the late 1940s as these residents became more affluent and Northeast Philadelphia began to develop new housing with lawns and conveniences such as modern plumbing. In most cases African Americans moved into the vacant houses and as this began to increase, true white flight began. Increasingly, people moved out of North Philadelphia not solely to move into newer homes, but to avoid facing decreasing property values and increased criminality. For a time, Lower North Philadelphia became a great center of black culture and music, most notably Jazz. Many commercial corridors were maintained for decades, and a great many musicians came to North Philadelphia, like John Coltrane and Stan Getz. By 1964, North Philadelphia was the city's center of African American culture home to 400,000 of the city's 600,000 Black Residents.

As the century marched past middle age, many other problems symptomatic of all US cities of the time came about. Many of the neighborhoods in North Philadelphia sprung up around one monolithic factory, which was the center of the community's income. Each factory that closed down devastated its host neighborhood. In this way, the wave of national industrial collapse caused the rapid break up of numerous "factory neighborhoods" in the predominantly working class North Philadelphia.

On the evening of August 28, 1964 a black woman named Odessa Bradford got into an argument with two police officers, one black, Robert Wells, and the other white, John Hoff, after her car stalled at 23rd Street and Columbia Avenue. After Bradford refused to comply with the two officers' orders to move the car, because the car had stalled, and she was unable to drive it, an argument ensued. The officers then tried to physically remove Bradford from the car. She resisted and a large crowd assembled in the area. A man tried to come to Bradford's aid by attacking the police officers at the scene, but he and Bradford were arrested. Rumors then spread throughout North Philadelphia that a pregnant black woman had been beaten to death by white police officers. Later that evening, and throughout the next two days, angry mobs looted and burned mostly white-owned businesses in North Philadelphia, mainly along Columbia Avenue. Outnumbered, the police response was to withdraw from the area rather than aggressively confront the rioters. The race riots of 1964 became iconic for the rising ethnic tensions in the region, and the continued withdrawal of white residents. The riot, which virtually destroyed the central shopping district of North Philadelphia, signaled the beginning of the end for the North's commercial sector. The withering of the American manufacturing sector led to the closing of many of the factories that many northern neighborhoods were centered on and depended on. Increased urban blight and the general decline of Philadelphia in the late 20th century even saw the decline of even many of the strong black communities in North Philadelphia. The legendary Connie Mack Stadium was closed in favor of the new Pattison Sports Complex. North Philadelphia Station lost Amtrak Service, and the BSL subway line garnered a reputation for violent crime. The great art deco office buildings and government institutions were mostly abandoned, as were the mansions of the many ruined industrialists. 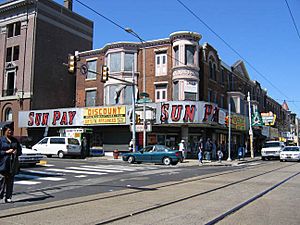 Commercial District of Germantown and Lehigh Avenue, in the Hartranft neighborhood of North Philadelphia 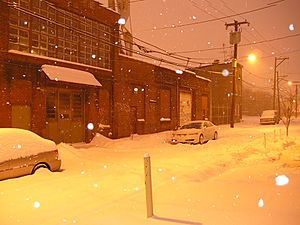 Ogden Street in North Philadelphia on a snowy night.

North Philadelphia, like many other sections of Philadelphia, is highly racially and socially segregated block by block. A noticeable pattern in the area is that, in the southern part of North Philadelphia (south of about Erie Avenue), Germantown Avenue (which later becomes North 6th Street) is the dividing point between the areas that are predominantly Black (to the west), and the areas that are predominantly Hispanic (to the east). Though this is slowly changing, with a small yet growing population of Hispanics living west of Germantown Avenue, and already significant population of Blacks living east of that street.

East of Front street, blocks start to get more diverse, with significant populations of Hispanics, blacks, and whites. Also, as the Hispanic community continues to grow eastward, the ethnic white enclaves of eastern North Philadelphia continues to shrink.

North Philadelphia is usually described as an area north of Center City, between Front Street and Fairmount Park.

Today, many remnants of these more prosperous eras remain. However, many historic buildings have collapsed, either from neglect or demolition, and thousands more still lie abandoned. A handful have become protected historic properties, and 67 properties and districts were added to the National Landmark of Historic Places. Several blocks, with numerous old mansions, have been re-zoned as the aforementioned historic districts. A great many extravagant churches were built over the years, as well. Some still stand, but all too often money is scarce to preserve their deteriorating architecture. The trolley lines that once criss-crossed the northern streets and linked the region with the rest of Philadelphia were shut down by SEPTA in 1992. Immense, abandoned factories sit idle; warehouses lie empty; and disused heavy rail lines scar the landscape. The names of the old industrialists, such as Gratz, Poth, Uber, Bouvier, and Schmidt, still adorn many buildings and street signs in the area but are otherwise foreign to many modern-day residents.

The Neighborhood Transformation Initiative, or NTI, was a City program launched by Mayor John F. Street. The program called for the demolition of thousands of condemned buildings and the construction of large-scale, medium-density public housing, with restoration efforts to be employed on salvageable houses. Many blocks of old rowhouses have been bulldozed and replaced with suburban-style tract houses. This program has radically changed some sections of North Philadelphia. Some charge that little effort was made to save a number of historic buildings, others that NTI was needed to change blighted neighborhoods. The lasting effects of the program remain to be seen. 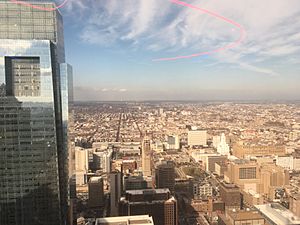 View of North Philadelphia from One Liberty Observation Deck

Some areas, like Olney, Allegheny, and Erie, still have relatively active communities, but even they are often troubled by drugs, crime, and/or social underfunding. Allegheny West has advanced, mostly from the support of some of the last industries in North Philadelphia, such as Pep Boys, which is headquartered in the neighborhood.

Several parts of North Philadelphia, especially those that border the Center City district, have recently been experiencing varying levels of gentrification. Once economically divested neighborhoods like Brewerytown, Francisville, Northern Liberties, Poplar, and West Kensington have seen large scale development break ground. Other regions have seen virtually no change, save the rising housing values that have accompanied increased attention in urban markets. Many residents of communities in North Philadelphia have voiced resistance towards these gentrifying forces, viewing the sudden investment as an invasion that threatens the traditional character of the neighborhoods. Some poor and elderly residents have been pushed out of increasingly valued neighborhoods adjacent to the dynamic Center City housing market, as speculative buyers push outward from the city core. Many fear this process will be repeated in North Philadelphia. Many buildings are abandoned.

All content from Kiddle encyclopedia articles (including the article images and facts) can be freely used under Attribution-ShareAlike license, unless stated otherwise. Cite this article:
North Philadelphia Facts for Kids. Kiddle Encyclopedia.