Brewerytown is a neighborhood in the North Philadelphia district of the city of Philadelphia, Pennsylvania, United States. An unofficial region, Brewerytown runs approximately between the Schuylkill River's eastern bank and 25th Street, bounded by Cecil B. Moore Avenue to the north and Parrish Street to the south. Brewerytown got its name because of the numerous breweries that were located along the Schuylkill during the late 19th century and early 20th century. It is now primarily a residential neighborhood, with a growing and active commercial sector along Girard Avenue.

The earliest indications of this legacy can be seen on maps from the 1860s, which list several minor brewers and distillation facilities in this region. Proximity to the river and nearby farmland allowed these establishments to flourish, and as demands increased, so did development in Brewerytown. Much of the expansion into the early 20th century was handled by architect Otto Wolf, who oversaw the construction of over 60 buildings in the area, bringing a distinct German texture to the houses, saloons, and breweries of the area. Some of his buildings are still standing, including the Bergdoll Brewing complex, and F.A. Poth Brewing. Columbia Park, the first home of the Philadelphia Athletics major league baseball team, was located at 30th and Oxford Streets in the neighborhood.

At its peak, 700 breweries operated across Philadelphia, several in a ten-block area of Brewerytown. Unfortunately, with the collapse of local industry later in the 20th century, originally started by the implementation of Prohibition in the United States, and beer production moving primarily to the Midwest, every single brewer had vanished by 1987. The industry has slowly returned to the city, but at nowhere near the capacity of its heyday. As of 2016, the only active brewery in Brewerytown is Crime & Punishment Brewing Company, which opened in 2015. During this late 20th-century slump, the entirety of North Philadelphia, Brewerytown included, was hit hard by economic depression, white flight and a myriad of other factors. Much of the area was deemed blighted by the city government. For the last few decades until recently, Brewerytown has been a predominantly poor, African-American neighborhood.

In 1991, the Brewerytown Historic District was certified by the National Register of Historic Places. The district contains 380 buildings and is roughly bounded by 30th St., Girard Ave., 32nd St. and Glenwood Ave. 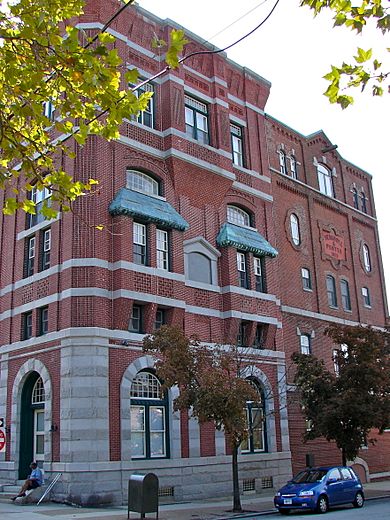 Breweries that operated in the neighborhood included:

All content from Kiddle encyclopedia articles (including the article images and facts) can be freely used under Attribution-ShareAlike license, unless stated otherwise. Cite this article:
Brewerytown, Philadelphia Facts for Kids. Kiddle Encyclopedia.