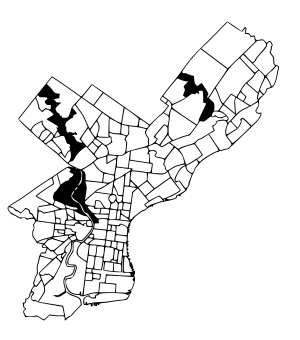 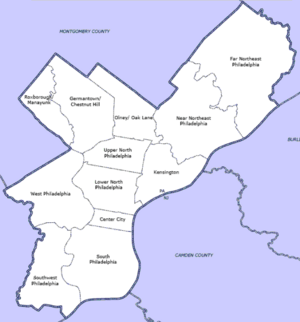 The following is a list of neighborhoods, districts, and other places located in the city of Philadelphia, Pennsylvania, United States. The list is organized by broad geographical sections within the city. While there is no official list of neighborhoods, districts, and places, this list was compiled from the sources listed in the References and External links sections, as well as from information from residents of Philadelphia.

Common usage for Philadelphia's neighborhood names does not respect "official" borders used by the city's police, planning commission or other entities. Therefore, some of the places listed here may overlap geographically, and residents do not always agree where one neighborhood ends and another begins.

Historically, many neighborhoods were defined by incorporated townships (Blockley, Roxborough), districts (Belmont, Kensington, Moyamensing, Richmond), or boroughs (Bridesburg, Frankford, Germantown, Manayunk) before being incorporated into the city with the Act of Consolidation of 1854. Adding further complication is the fact that in some parts of Philadelphia, especially the central areas of North, West, and South Philadelphia, residents have long been more likely to identify with the name of their section of the city than with any specific neighborhood name. Today, community development corporations, neighborhood watches, and other civic organizations are influential in shaping the use of neighborhood names and approximate boundaries. 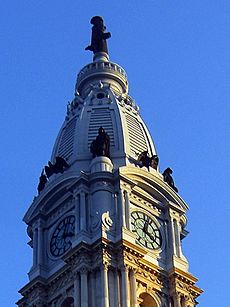 The South Philadelphia Planning Analysis Section is bounded by South Street on the north and the Delaware and Schuylkill Rivers to their confluence. 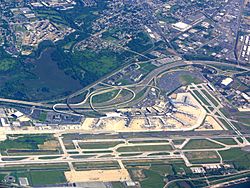 Southwest Philadelphia (formerly Kingsessing Township) is a section of Philadelphia, Pennsylvania that can be described as extending from the western side of the Schuylkill River to the city line, with the northern border defined by the Philadelphia City Planning Commission as east from the city line along Baltimore Avenue moving south along 51st Street to Springfield Ave. It follows the train tracks until 49th Street. From 49th and Kingsessing Ave the line moves east along Kingsessing Ave. The line then moves south along 46th St to Paschall Ave where it jogs to join Grays Ferry where the line runs to the Schuylkill River.

West Philadelphia, nicknamed West Philly, is a section of Philadelphia. Though there is no official definition of its boundaries, it is generally considered to reach from the western shore of the Schuylkill River, to City Line Avenue to the northwest, Cobbs Creek to the southwest, and the SEPTA Media/Elwyn Line to the south. 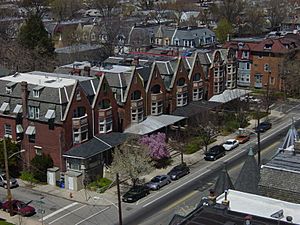 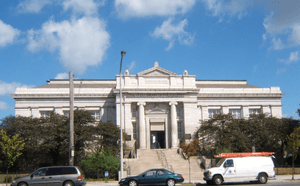 The Bridesburg-Kensington-Richmond section of Philadelphia is the area north of Center City. This area "... consists of the neighborhoods including: Bridesburg, Fishtown, Olde Richmond, Juniata Park, New Kensington, North West Kensington, Port Richmond..." and "... was once predominantly industrial. However, most heavy industry has now left." 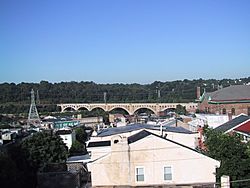 The Roxborough-Manyunk section of Philadelphia is an official planning district of the Philadelphia City Planning Commission, consisting of the namesake boroughs of Roxborough and Manayunk. Geographically, the area is northwest of Center City.

The Germantown-Chestnut Hill section of Philadelphia is about 7–8 miles northwest from the center of the city. The neighborhood of Germantown is rich in historic sites and buildings from the colonial era, a few of which are open to the public. Its namesake also comes from the village of Chestnut Hill was part of the German Township laid out by Francis Daniel Pastorius and came to include the settlements originally known as Sommerhausen and Crefeld, as well as part of Cresheim. The area generally served as a gateway between Philadelphia and the nearby farmlands. During the American Revolutionary War era (late 18th century), the area was one of many summer vacation spots due to its higher elevation, 400–500 feet (120 to 150 m) above sea level, and cooler temperatures than the historic Center City. Chestnut Hill is still stereotypically known as one of the more affluent sections of Philadelphia.

The Olney-Oak Lane Planning Analysis Section is an official section of Philadelphia. It is part of North Philadelphia. 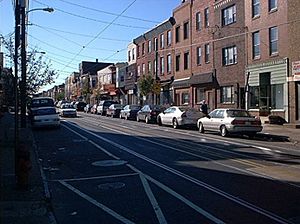 Richmond Street, one of the area's main thoroughfares in Port Richmond (2005).

Near Northeast Philadelphia, is a section of the city of Philadelphia. When combined with the Far Northeast, to be "Northeast Philadelphia", the 2000 Census shows that the combined area has a sizable percentage of the city's 1.547 million people — a population of between 300,000 and 450,000, depending on how the area is defined. Beginning in the 1980s, many of the Northeast's middle class children graduated from college and settled in suburbs, especially nearby Bucks County. Whites were once predominant in northeastern Philadelphia. However, with the emigration of older populations and white flight a new influx of Hispanics have settled in the Northeast, while African Americans and Asian immigrants have purchased homes in northeast Philadelphia. The Northeast is now both racially and ethnically diverse and has a large immigrant population. 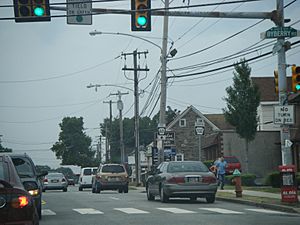 All content from Kiddle encyclopedia articles (including the article images and facts) can be freely used under Attribution-ShareAlike license, unless stated otherwise. Cite this article:
List of Philadelphia neighborhoods Facts for Kids. Kiddle Encyclopedia.