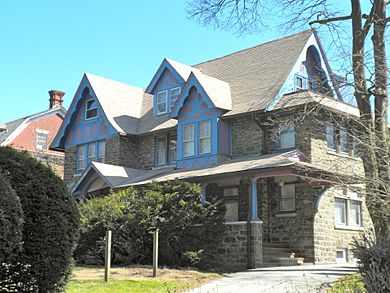 Overbrook Farms is a neighborhood on the western edge of the West Philadelphia section of Philadelphia, Pennsylvania, United States. It is roughly bounded by City Avenue (U.S. Route 1), 58th Street, Woodbine Avenue, and 66th Street at Morris Park. The neighborhood is bisected by Lancaster Avenue (U.S. Route 30) and the original Pennsylvania Railroad "main line". Today the rail line is used by both Amtrak passenger service and SEPTA's commuter Paoli/Thorndale Line.

This region of Philadelphia and its suburbs were originally settled by Welsh immigrants, who purchased land from William Penn. Two of these farms contributed land for what became the Overbrook Farms neighborhood, which was developed beginning in 1892. The neighborhood is often incorrectly considered to be a sub-section of the larger and densely developed Overbrook neighborhood.

A more recent development of smaller homes with modern incursions, called Greenhill Farms, is not included within the historic district. This development extends from 66th Street to 72nd Street. Bordered on three sides by Morris Park and on the west by City Avenue, it includes some original mansions built on Wistar Morris' gentleman's farm. The City Line Avenue Bridge was listed on the National Register of Historic Places in 1988.

All content from Kiddle encyclopedia articles (including the article images and facts) can be freely used under Attribution-ShareAlike license, unless stated otherwise. Cite this article:
Overbrook Farms, Philadelphia Facts for Kids. Kiddle Encyclopedia.