Jewelers' Row, located in the Center City section of Philadelphia, Pennsylvania, is composed of more than 300 retailers, wholesalers, and craftsmen located on Sansom Street between Seventh and Eighth Streets, and on Eighth Street between Chestnut and Walnut Streets.

It is the oldest diamond district in America, and second in size only to the one in New York City. Many of the area's retail, jewelrymaking and appraisal businesses have been owned by the same families for five generations. 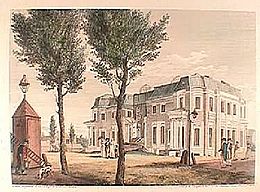 Sansom bought (at sheriff's sale) the property and unfinished house of Robert Morris, on Walnut St. between 7th and 8th Sts. He bisected the land with a new east-west eponymous street. Carstairs purchased the south side of Sansom St. and erected 22 look-alike dwellings. Prior to this time houses had been built not in rows, but individually. It can be contrasted with Elfreth's Alley where all the house are of varying heights and widths, with different street lines, doorways and brickwork.

The grid pattern laid down by William Penn and continued by subsequent planners and surveyors heavily influenced the row house form of architecture. The block of row houses is an important example of Philadelphia’s architectural and developmental history.

Sansom erected the buildings on what was then the outskirts of Philadelphia. To attract tenants he paved Sansom Street at his own expense. He then hired Benjamin Latrobe to design another row on the 700 block of Walnut Street. A prominent feature of the street is the repetitive flat expanse of the buildings, which made it ideal for commercial conversion.

Changes throughout the years

Alterations in the late 19th and early 20th centuries changed most of the row – only 700, 730 and 732 Sansom retained their original experience. 710 Sansom, built in 1870, is a three-story commercial building with stone lintels. Its Victorian style is typical of the buildings that became the center for jewelry and diamond merchants who developed Jewelers’ Row in the mid-19th century (1860–1879).

After the homes were sold for commercial interests, several engravers of plates for books moved in. At 732, the engraver for Edgar Allan Poe lived and worked. His customer, Poe, ate dinner in the house on several occasions.

All content from Kiddle encyclopedia articles (including the article images and facts) can be freely used under Attribution-ShareAlike license, unless stated otherwise. Cite this article:
Jewelers' Row, Philadelphia Facts for Kids. Kiddle Encyclopedia.