The area was once part of the plantation of James Logan, adviser to William Penn, founder of Pennsylvania. Modern transportation formed the community: the Broad Street Subway, which opened in 1928, and a thriving network of streetcar and bus routes, allowed development of what was then considered one of the earliest suburban communities in Philadelphia, though the area is considered urban today. The transportation network still provides Logan residents easy access to the rest of the city.

Logan had been a predominantly Jewish neighborhood until the 1970s. 11th Street was a center of commerce with two bakeries, a deli, and a dairy store. Broad Street had three movie theaters. In the 1970s, Korean people began moving into Logan and established businesses. By the mid-1980s Koreans began moving out of Logan and into sections such as Olney in Philadelphia, and nearby suburbs such as Cheltenham as the area began to gentrify, as African-Americans and Hispanics, which accompanied the migration of Koreans into the neighborhood from the previous decade, began to populate the area, as Koreans began to migrate out of the Logan section and into the nearby suburbs further from Philadelphia.

The population of Logan decreased by 14% between the 1990 and 2000 censuses, in large part because of the razing of numerous row homes in the Southern portion of the neighborhood, which had sunk into the landfill on which they were built. This area today is known as the "Logan Triangle".

The Stenton is the former home of James Logan, colonial Mayor of Philadelphia and Chief Justice of the Pennsylvania Supreme Court. This home has been turned into a house museum. 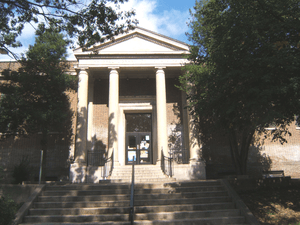 The Free Library of Philadelphia Logan Branch serves Logan. It was built in 1917.

The Logan neighborhood has three stops on the Broad Street Line:

Logan Redevelopment Area, in the southern part of the Logan neighborhood, is a 21-acre (85,000 m2) area that was completely demolished due to unsafe subsidence caused by engineering deficiencies and poor foundation issues with the original construction. The city condemned about 957 homes in this large area and demolished them in the early-1990s, leaving only a ghostly grid of rectangular streets as a reminder of the former urban landscape. The area has been slated for commercial redevelopment.

In the past factories were clustered in a few areas; historically they were diverse, and included Mrs. Smith's Pies on Lindley Avenue and the Fleer Baseball Card Gum Company near 10th Street and Lindley. Four block commercial districts of retailers and neighborhood businesses stretch along Broad Street and the parallel Old York Road. 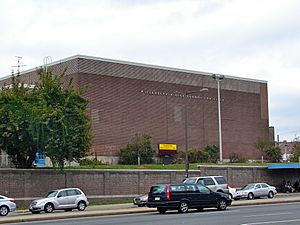 Logan is a part of the School District of Philadelphia.

Logan is also home to one college: La Salle University, a private, co-educational, Roman Catholic university founded in 1863 by the Christian Brothers religious order. La Salle is located in the northwestern corner of the neighborhood.

All content from Kiddle encyclopedia articles (including the article images and facts) can be freely used under Attribution-ShareAlike license, unless stated otherwise. Cite this article:
Logan, Philadelphia Facts for Kids. Kiddle Encyclopedia.