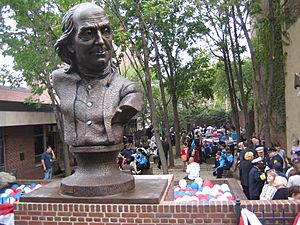 A luncheon in Girard Fountain Park after the Oct. 5, 2007, dedication of Keys To Community, a nine-foot bronze bust of Benjamin Franklin by sculptor James Peniston.

Old City is a neighborhood in Center City, Philadelphia, in the area near the Delaware River where William Penn and the Quakers first settled. To tourists, it is best known as the site of Independence Hall and its encompassing Independence National Historical Park, Elfreth's Alley, Carpenters' Hall, the Betsy Ross House, and many of Philadelphia's other historic sites.

The Old City District occupies several blocks between Front and Sixth Streets, bounded by Vine Street to the north and Walnut Street to the south. The Philadelphia Almanac and Citizens' Manual gives a larger set of boundaries to the Old City area, defined as the area within Spring Garden Street, 4th Street, the Delaware River, and Walnut Street. The Old City Redevelopment Area is bound by Vine Street, the Delaware River, Lombard Street and 7th Street.

Old City is home to the oldest continually inhabited street in America, Elfreth's Alley, Home to more than 3,000 people since 1702, the street today holds 32 houses built between 1728 and 1836.

All content from Kiddle encyclopedia articles (including the article images and facts) can be freely used under Attribution-ShareAlike license, unless stated otherwise. Cite this article:
Old City, Philadelphia Facts for Kids. Kiddle Encyclopedia.