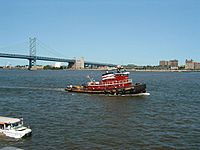 Tugboat off Penn's Landing, near the foot of the Benjamin Franklin Bridge. 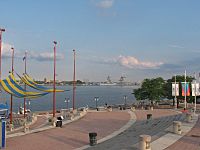 Penn's Landing is a waterfront area of Center City Philadelphia along the Delaware River. Its name commemorates the landing of William Penn, the founder of Pennsylvania in 1682. Penn's Landing is bounded by Front Street to the west, the Delaware River to the east, Spring Garden Street to the north, and Washington Avenue to the south, and is primarily focused on the Christopher Columbus Boulevard (Delaware Avenue) corridor.

Development of the area is handled by the Delaware River Waterfront Corporation. The corporation is a non-profit that was established in 2009 to manage the publicly owned land on the central waterfront on behalf of the City of Philadelphia and the Commonwealth of Pennsylvania.

Penn's Landing serves as the site for several summertime events in the city. The main public space at Penn's Landing is The Great Plaza, a mostly concrete labyrinth located along the Delaware River at Christopher Columbus Boulevard and Chestnut Street. During the summer months, Festival Pier at Spring Garden Street serves as a venue for outdoor concerts and has a capacity of approx. 6,500 people.

Several historic ships are moored at Penn's Landing. The barque Moshulu is a floating restaurant; the World War II-era submarine USS Becuna and the Spanish–American War-era cruiser USS Olympia (C-6) are part of the Independence Seaport Museum; and the barquentine Gazela and tugboat Jupiter are moored there by the Philadelphia Ship Preservation Guild.

The Blue Cross RiverRink is an skating rink and outdoor event facility located at Penns Landing. During the winter months it operates as an ice skating rink, and hosts the Blue Cross RiverRink WinterFest, featuring winter-themed decorations, fire pits, and an outdoor beer garden. The first Winterfest was held in 2013, concepted by Avram Hornik of FCM Hospitality, who also owns the neighboring outdoor waterfront restaurant, Morgan's Pier. During the summer months, the ice rink is converted into a roller skating rink under the name SummerFest.

Sterling Helicopter operates the only public-use heliport in Philadelphia at Pier 36.

Spruce Street Harbor Park is one of the main attractions at Penn's Landing. It is a urban beach park the attracts thousand of visitors each year. The park has boardwalk along the Delaware River with a beachfront atmosphere with chairs, tables and hammocks.The park is only open seasonally in the summer or warm months, and closed during the winter. 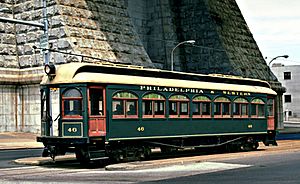 From 1982 until 1995 a heritage trolley line (tramway) operated in Penn's Landing, on weekends and holidays from about April to October each year. Intended to attract tourists and help spur redevelopment of the area, the trolley line was established along a 1.1-mile (1.8 km) section of disused ex-Philadelphia Belt Line Railroad freight railroad track (owned by Conrail), from the Benjamin Franklin Bridge to Pier 51. Grants from the city and Fidelity Bank funded the installation of overhead trolley wire and supporting poles, along with an electrical substation to provide power. Operation began on September 5, 1982, and was run by volunteers from the Buckingham Valley Trolley Association. The service used historic trolley cars on loan from museums. When not in use, the cars were stored in a building on city-owned Pier 51. The service ran for the last time on December 17, 1995, and the trolley wire and poles were removed by March 1996.

The Delaware River Port Authority has considered re-opening the Franklin Square PATCO Speedline station and with a connection to a new trolley route on Delaware Avenue/Columbus Road operated by PATCO; however, no fixed dates have been set for either project. 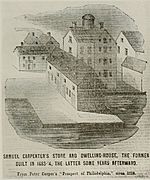 Samuel Carpenter (1649–1714) bought a lot extending from King Street (now Water Street) to Front Street and on to Second Street in 1683. This lot extends to Ton (now Tun) Alley. On the east side of this lot (Delaware front) he built a wharf, or "a fair key" as mentioned by William Penn, which was the first wharf built in Philadelphia. It became known as "Carpenter's Wharf" and could handle ships of 500 tons or more. Over the years it was expanded, modernized and would now be under Interstate-95 where the highway passes Penn's Landing.

All content from Kiddle encyclopedia articles (including the article images and facts) can be freely used under Attribution-ShareAlike license, unless stated otherwise. Cite this article:
Penn's Landing Facts for Kids. Kiddle Encyclopedia.