The Camden Waterfront, also known as the Central Waterfront, is a tourist and entertainment district in Camden, New Jersey on the Delaware River south of the Ben Franklin Bridge and north of Port of Camden.

The district is characterized by its visitor attractions and its location offering views of the river and the Philadelphia skyline. It is served by RiverLink Ferry which crosses the river to Philadelphia and the Cooper St-Rutgers, Aquarium and Entertainment Center stations of the RiverLINE light rail system. According to the 2000 U.S. Census, the neighborhood has a population of 962.

The Susquehanna Bank Center (formerly known as the Tweeter Center) is a 25,000-seat open-air concert amphitheater that was opened in 1995 and renamed after a 2008 deal in which the bank would pay $10 million over 15 years for naming rights. 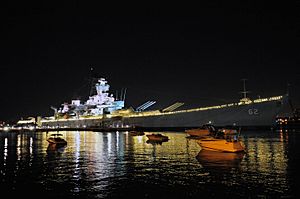 Campbell's Field, opened in 2001, is home to the Camden Riversharks of the independent Atlantic League; and the Rutgers–Camden baseball team.

The USS New Jersey (BB-62) was a U.S. Navy battleship that was intermittently active between the years 1943 and 1991. After its retirement, the ship was turned into the Battleship New Jersey Museum and Memorial, that opened in 2001 along the waterfront. The New Jersey saw action during World War II, the Korean War, the Vietnam War, and provided support off Lebanon in early 1983. 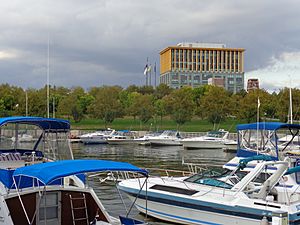 Other attractions at the Waterfront are the Wiggins Park Riverstage and Marina, One Port Center, Nipper Building (aka Victor Lofts), the Walt Whitman House, the Walt Whitman Cultural Arts Center, the Rutgers–Camden Center For The Arts and the Camden Children's Garden. 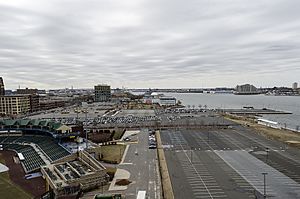 In May 2013, the New Jersey Economic Development Authority announced that it would seek developers for the site of the demolish Riverfront State Prison just north of the Central Waterfront and the Ben Franklin Bridge in Cooper Point. In September 2013 Waterfront Renaissance Associates announced that it proposed to a develop a 2.3-million-square-foot commercial complex on 16 acres (6.5 ha) called the Riverfront World Trade Center. The project would be built in four phases, the first of which would be a promenade along the Delaware River.The plan calls for two 22-story and two 18-story buildings.

In October 2013, Herschend Family Entertainment announced they would add an attraction adjacent to the Adventure Aquarium, a 300 ft (91 m), 25-story observation tower ride with a moored balloon and gondola that would carry passengers above the site offering views of city, the Delaware River and the Philadelphia skyline. Its planned opening is in Spring 2015.

In in September 2016 the Philadelphia 76ers opened their practice facility and future home offices to the Waterfront. The new headquarters and the state-of-the-art, 120,000-square-foot practice center was made possible in part by $82 million in tax credits approved by the New Jersey Economic Development Authority.

The state of New Jersey has offered numerous tax incentives to corporations to locate in Camden, many along the Waterfront and Port of Camden districts. In November 2014, the state offered tax incentives to Lockheed Martin to relocate 250 jobs to labs at the L-3 Building and Waterfront Technology Center. Proposals to build two towers 590 ft (180 m) and 450 ft (140 m) were unveiled in September 2015. Other elements of the project began construction in December 2016.

All content from Kiddle encyclopedia articles (including the article images and facts) can be freely used under Attribution-ShareAlike license, unless stated otherwise. Cite this article:
Camden Waterfront Facts for Kids. Kiddle Encyclopedia.