The Battleship New Jersey Museum and Memorial is located at 62 Battleship Place, Camden, New Jersey, United States. This museum ship preserves and displays USS New Jersey, the most decorated battleship to have served in the U.S. Navy and one of the largest ever built.

In February 1991, USS New Jersey was retired and sent to Bremerton, Washington to serve as one of the many mothball ships, effectively making the battleship a backup in case of an emergency. After being on and off the Naval Registry for another seven years, the battleship was approved by the United States Congress to be swapped with USS Iowa on the Naval Registry. USS New Jersey was slated to go to one of three sites in New Jersey: Bayonne, Jersey City, or Camden which would be chosen by the Battleship Commission. On February 3, 1999, Jersey City decided to not submit a proposal to obtain the battleship, citing unity with Bayonne and concerns about the expense of getting the battleship properly stationed there. Bayonne became a front runner to Battleship Commission chairman Joseph Azzolina, who stated that the Bayonne and Jersey City proposal would have a higher chance at attracting tourist than in Camden. Camden countered, offering four million dollars to convert the battleship into a museum if the battleship were to come to Camden. Camden wanted the battleship to enhance the waterfront and also because so many of the people who worked on building the battleship had lived in the South Jersey and Pennsylvania area.

On February 7, 2001, the battleship got approval to their pier changes they wished to implement, but still needed to be given an exception to dredge the area during the spring fish mating season. On May 8, 2001, the United States Army Corps of Engineers approved the dredging of the Delaware River in order to have the battleship stationed at the new dock. The ship needed 35 feet (11 m) of depth clearance in order to fit. Excess dredging materials went to the National Park in Gloucester County.

Originally, the battleship museum was planning to open Labor Day weekend, but was ultimately delayed due to Tropical Storm Barry delaying a shipment of materials for the battleship. Opening day got delayed to October 15, 2001. The museum ran tour groups of 15 people that lasted anywhere from 90 minutes to 120 minutes and covered 7 decks of the ship. The museum expected to have 1,500 people per day during the first few opening days. Within the first couple of days, most reviews were positive, however some were not happy with the touring situation. Some wished that people were allowed to explore the museum on their own without needing to be on a tour. 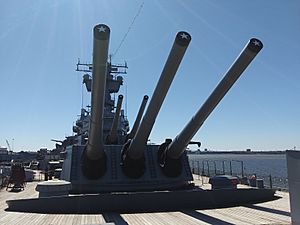 Over 90,000 hours of donated time went into getting the museum ready for opening day.

All content from Kiddle encyclopedia articles (including the article images and facts) can be freely used under Attribution-ShareAlike license, unless stated otherwise. Cite this article:
Battleship New Jersey Museum and Memorial Facts for Kids. Kiddle Encyclopedia.