Bayonne was originally formed as a township on April 1, 1861, from portions of Bergen Township. Bayonne was reincorporated as a city by an act of the New Jersey Legislature on March 10, 1869, replacing Bayonne Township, subject to the results of a referendum held nine days later. At the time it was formed, Bayonne included the communities of Bergen Point, Constable Hook, Centreville, Pamrapo and Saltersville.

Bayonne is east of Newark, the state's largest city, north of Elizabeth in Union County and west of Brooklyn. It shares a land border with Jersey City to the north and is connected to Staten Island by the Bayonne Bridge. While somewhat diminished, traditional manufacturing, distribution, and maritime activities remain a driving force of the economy of the city, and a portion of the Port of New York and New Jersey is located there.

Originally inhabited by Native Americans, the region presently known as Bayonne was claimed by the Netherlands after Henry Hudson explored the Hudson River which is named after him. According to Royden Page Whitcomb's 1904 book, First History of Bayonne, New Jersey, the name Bayonne is speculated to have originated with Bayonne, France, from which Huguenots settled for a year before the founding of New Amsterdam. However, there is no empirical evidence for this notion, which is considered apocryphal. Whitcomb gives more credence to the idea that Erastus Randall, E.C. Bramhall and B.F. Woolsey, who bought the land owned by Jasper and William Cadmus for real estate speculation, named it Bayonne for purposes of real estate speculation, because it was located on the shores of two bays, Newark and New York.

The city experienced strikes that led to significant civil unrest during the Bayonne refinery strikes of 1915–1916, in which mostly Polish American workers staged labor actions against Standard Oil of New Jersey and Tidewater Petroleum, seeking improved pay and working conditions. Four striking workers were killed when strikebreakers protected by police fired into a crowd.

The city is located south of Jersey City on a peninsula earlier known as Bergen Neck surrounded by Upper New York Bay to the east, Newark Bay to the west, and Kill Van Kull to the south.

Hackensack RiverWalk begins at Bergen Point where the Kill Van Kull meets the Newark Bay and connect to the Hudson River Waterfront Walkway. A plaque unveiled on May 2, 2006, for the new Richard A. Rutkowski Park, a wetlands preserve on the northwestern end of town that is part of the RiverWalk. Also known as the Waterfront Park and Environmental Walkway, it is located immediately north of the Stephen R. Gregg Hudson County Park.

Hudson River Waterfront Walkway is part of a walkway that is intended to run the more than 18 miles (29 km) from the Bayonne Bridge to the George Washington Bridge.

The Bayonne Bridge connects south to Staten Island over the Kill Van Kull. Kennedy Boulevard is a major thoroughfare along the west side of the city from the bridge north to Jersey City and North Hudson.

The Newark Bay Extension (Interstate 78) of the New Jersey Turnpike northbound travels to Jersey City and, via the Holland Tunnel, Manhattan. Westbound, the Newark Bay Bridge provides access to Newark, Newark Liberty International Airport and the rest of the turnpike (Interstate 95).

Route 440 runs along the east side of Bayonne, and the West Side of Jersey City, partially following the old Morris Canal route. Although it has traffic lights it is usually the quickest route north-south within Bayonne. It connects to the Bayonne Bridge, I-78, and to Route 185 to Liberty State Park.

Bus transportation is provided on three main north-south streets of the city: Broadway, Kennedy Boulevard, and Avenue C, both by the state-operated NJ Transit and several private bus lines. The Broadway line runs solely inside Bayonne city limits, while bus lines on Avenue C and Kennedy Boulevard run to various end points in Jersey City. The NJ Transit 120 runs between Avenue C in Bayonne and Battery Park in Downtown Manhattan during rush hours in peak direction while the 81 provides service to New Jersey.

MTA Regional Bus Operations provides bus service between Bayonne and Staten Island on the S89 route, which connects the 34th Street light rail station and the Eltingville neighborhood on Staten Island with no other stops in Bayonne. It is the first interstate bus service operated by the New York City Transit Authority. 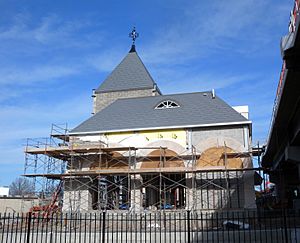 The Hudson-Bergen Light Rail has four stops in Bayonne, all originally from the former Central Railroad of New Jersey (CNJ). They are located at 45th Street, 34th Street, 22nd Street, all just east of Avenue E, and 8th Street (the southern terminal of the 8th Street-Hoboken Line) at Avenue C, which opened in January 2011.

For 114 years, the CNJ ran frequent service through the city. Trains ran north to the Central Railroad of New Jersey Terminal in Jersey City. Trains ran west to Elizabethport, Elizabeth, and Cranford for points west and south. The building of the Aldene Connection by-passed CNJ trains around Bayonne so that nearly all trains would either terminate at Newark Pennsylvania Station or at Hoboken Terminal. Until August 6, 1978, a shuttle service between Bayonne and Cranford retained the last leg of service with the CNJ trains. 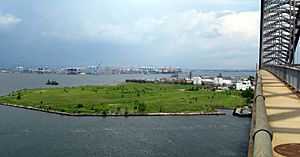 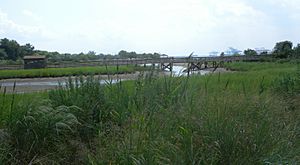 Bayonne is located within the New York media market, with most of its daily papers available for sale or delivery. Local, county, and regional news is covered by the daily Jersey Journal. The Bayonne Community News is part of The Hudson Reporter group of local weeklies. Other weeklies, the River View Observer and El Especialito also cover local news. Bayonne-based periodicals include the Bayonne Evening Star-Telegram (B.E.S.T.).

Bayonne's local culture is served by the Annual Outdoor Art Show, which was instituted in 2008, in which local artists display their works.

Jackie Gleason, a former headliner at the Hi-Hat Club in Bayonne, was fascinated by the city and mentioned it often in the television series The Honeymooners.

Films set in Bayonne include the 1991 film Mortal Thoughts, with Demi Moore and Bruce Willis, which was filmed near Horace Mann School and locations around Bayonne and Hoboken; the 2000 drama Men of Honor, starring Robert De Niro and Cuba Gooding Jr.; the 2002 drama Hysterical Blindness; and the 2005 Tom Cruise science fiction film War of the Worlds, which opens at the Bayonne home of the lead character, and depicts the destruction of the Bayonne Bridge by aliens. Films shot in Bayonne include the 2001 film A Beautiful Mind, scenes of which were filmed at the Peninsula at Bayonne Harbor, and the 2008 Mickey Rourke drama The Wrestler, which was partially filmed in the Color & Cuts Salon and the former Dolphin Gym, both of which are on Broadway in Bayonne.

The comic strip Piranha Club (originally "Ernie"), drawn by Bud Grace, is set in and around Bayonne.

The ABC sci-fi comedy television series, The Neighbors, is about a family that moves from Bayonne into a fictional gated community, Hidden Hills, that is populated by aliens from another planet posing as humans.

The Best Show with Tom Scharpling records near Bayonne, and the town is frequently mentioned due to Associate Producer Mike Lisk (a.k.a. AP Mike) being a Bayonne native, who tends bar at Massa's Tavern, a local bar.

All content from Kiddle encyclopedia articles (including the article images and facts) can be freely used under Attribution-ShareAlike license, unless stated otherwise. Cite this article:
Bayonne, New Jersey Facts for Kids. Kiddle Encyclopedia.