Frank A. Langella Jr. (/lænˈdʒɛlə/; born January 1, 1938) is an American stage and film actor. He has won four Tony Awards: two for Best Leading Actor in a Play for his performance as Richard Nixon in Peter Morgan's Frost/Nixon and as André in Florian Zeller's The Father, and two for Best Featured Actor in a Play for his performances in Edward Albee's Seascape and Ivan Turgenev's Fortune's Fool. His reprisal of the Nixon role in the film production of Frost/Nixon earned him an Academy Award nomination for Best Actor.

Langella, an Italian American, was born January 1, 1938, in Bayonne, New Jersey, the son of Angelina and Frank A. Langella Sr. (d. 1991), a business executive who was president of the Bayonne Barrel and Drum Company. Langella attended Washington Elementary School and Bayonne High School in Bayonne. After the family moved to South Orange, New Jersey, he graduated from Columbia High School in the South Orange-Maplewood School District in 1955 and later graduated from Syracuse University in 1959 with a Bachelor of Arts degree in drama.

Langella appeared off-Broadway (in The Immoralist at the Bouwerie Lane Theatre in 1963 and Robert Lowell's The Old Glory in 1965 among other shows) before he made his first foray onto a Broadway stage in New York in Federico García Lorca's Yerma at the Vivian Beaumont Theater, Lincoln Center, on December 8, 1966. He followed this role by appearing in William Gibson's A Cry of Players, playing a young, highly fictionalized William Shakespeare opposite Anne Bancroft in 1968.

Bancroft suggested Langella to her husband Mel Brooks, who cast him in a leading role in The Twelve Chairs (1970). The same year, he also appeared in Frank Perry's Diary of a Mad Housewife, being nominated for a Golden Globe Award for Most Promising Newcomer. Langella won his first Tony Award for his performance in Edward Albee's Seascape in 1975 and was nominated again for what may have been the performance for which he was best known in the early part of his career: the title role of the 1977 Broadway production of Dracula. Despite his initial misgivings about continuing to play the role, he was persuaded to star opposite Laurence Olivier in the subsequent film version directed by John Badham. He eschewed the career of a traditional film star by always making the stage the focal point of his career, appearing on Broadway in such plays as Strindberg's The Father (winning a Drama Desk Award), Match (Tony Award nomination), and Fortune's Fool, for which he won a second Tony Award.

Langella continued to juggle film and television with his stage work, playing Sherlock Holmes in a 1981 adaptation of William Gillette's play Sherlock Holmes. He repeated the role on Broadway in 1987 in Charles Marowitz's play Sherlock's Last Case. That same year, he portrayed the villain Skeletor in Masters of the Universe, one of his favorite parts. In 1988, he co-starred in the film And God Created Woman.

In 1993, he made a three-episode appearance on Star Trek: Deep Space Nine as the devious Bajoran Minister Jaro Essa. That same year, he also starred in the political comedy Dave starring Kevin Kline and Sigourney Weaver. He also played a supporting role in the Ivan Reitman comedy Junior alongside Arnold Schwarzenegger, Danny DeVito, and Emma Thompson. In 1994, he narrated the American Masters documentary on Tennessee Williams. In 1996, Langella starred in the comedy film Eddie, starring Whoopi Goldberg, with whom he was involved romantically until 2001. He also played Clare Quilty in the 1997 film adaptation of Lolita, starring Jeremy Irons and Melanie Griffith. In 1999, he starred opposite Johnny Depp in Roman Polanski's film The Ninth Gate. 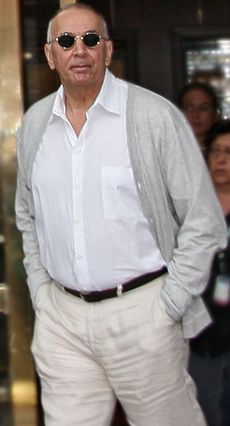 In 2000, Langella played Ebenezer Scrooge in a musical version of A Christmas Carol at Madison Square Garden. He has also appeared in notable off-Broadway productions, including in the title role of Robert Kalfin's Chelsea Theater Center production of The Prince of Homburg, which was filmed by PBS for the Theatre in America series. He starred as Sir Thomas More in the 2008 Broadway revival of A Man for All Seasons.

Langella also appeared as Al Baker in "Dominance", a 2003 episode of Law & Order: Special Victims Unit and had a recurring role as Pino in the 2005 short-lived sitcom Kitchen Confidential.

He was cast as Richard Nixon opposite Michael Sheen in Peter Morgan's play Frost/Nixon, which received enthusiastic reviews during a run at the Donmar Warehouse and Gielgud Theatre in London before moving to Broadway in New York's Bernard B. Jacobs Theater in April 2007. Langella won his third Tony Award for the role. He reprised the role of Nixon in the 2008 Oscar-nominated film of the play directed by Ron Howard. Langella also earned Golden Globe, Screen Actors Guild, and BAFTA nominations for Best Actor for the same performance. He was also nominated for an Academy Award in the Best Actor category for the role, losing to Sean Penn's performance in Milk.

Langella's film work also includes roles in George Clooney's Good Night, and Good Luck (2005) as former CBS chief executive William S. Paley, for which he was nominated for the Screen Actors Guild Award for Ensemble Cast. He also appeared in Bryan Singer's Superman Returns (2006) as Daily Planet editor Perry White. Langella received critical acclaim as well as the Boston Society of Film Critics Award in 2007 for his sensitive portrayal of an elderly novelist in Starting Out in the Evening. In late 2009, he starred in the Richard Kelly film The Box with Cameron Diaz and James Marsden.

In 2010, he played Louis Zabel in Oliver Stone's Wall Street: Money Never Sleeps, alongside Michael Douglas, Shia LaBeouf, and Carey Mulligan. That same year, he played a supporting role in All Good Things, with Ryan Gosling and Kirsten Dunst. In 2011, Langella starred in the drama thriller Unknown, opposite Liam Neeson and Diane Kruger. In 2012, he earned critical praise for his role in the independent film Robot & Frank, with Peter Travers of Rolling Stone magazine calling his performance "a masterclass in acting".

In 2015, Langella joined the cast of FX's critically praised drama The Americans with Keri Russell and Matthew Rhys. He appeared in seasons 3 through 5.

In 2016, he played the title role in Doug Hughes' production of the US premiere of Florian Zeller's play The Father at the Samuel J. Friedman Theatre on Broadway. He won his fourth Tony Award for that performance. That same year, he appeared in Captain Fantastic with Viggo Mortensen and was again nominated with the ensemble cast for the Screen Actors Guild Award. He also starred in the HBO television movie All the Way (2016) as Senator Richard Russell Jr., with Bryan Cranston as Lyndon B. Johnson. Langella received a Critics' Choice Television Award for Best Supporting Actor in a Movie/Miniseries nomination for his performance.

From 2018 to 2020, Langella appeared as Sebestian in Showtime's Kidding, starring Jim Carrey. The show's executive producer was Michel Gondry, and it received positive reviews.

In 2020, he played Judge Julius Hoffman in Aaron Sorkin's The Trial of the Chicago 7. The film follows the Chicago Seven, a group of anti-Vietnam War protesters charged with conspiracy and crossing state lines with the intention of inciting riots at the 1968 Democratic National Convention in Chicago. It was released in September, by Netflix.

In 2022, Langella was fired from his role in The Fall of the House of Usher following investigations into misconduct claims on set. In a guest column for Deadline, reacting to his firing, Langella claimed to have been "canceled," refuting allegations of unacceptable behavior and telling his version of events.

Langella was married to Ruth Weil from June 14, 1977 to their divorce in 1996. They have two children, Frank III and Sara. He also lived with actress/comedian Whoopi Goldberg, whom he had met on the set of Eddie, from 1996 until they separated in March 2001. Langella published a memoir in 2012 called Dropped Names: Famous Men and Women As I Knew Them. In a review in the New York Times Book Review, Ada Calhoun wrote that "Langella's book celebrated sluttiness as a worthy—even noble—way of life. ..... It was no wonder Langella was invited everywhere."

All content from Kiddle encyclopedia articles (including the article images and facts) can be freely used under Attribution-ShareAlike license, unless stated otherwise. Cite this article:
Frank Langella Facts for Kids. Kiddle Encyclopedia.