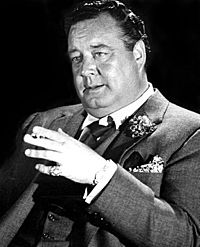 He was known for his role as Ralph Kramden on The Honeymooners. Among his most noted movies roles were as Minnesota Fats in the drama movie The Hustler (1961) starring Paul Newman, and as Buford T. Justice in the Smokey and the Bandit movie series. Gleason's career would span for nearly 41 years until his retirement in 1986.

Gleason died on June 24, 1987 in his Lauderhill, Florida home from colon cancer, he was 71 years old.

All content from Kiddle encyclopedia articles (including the article images and facts) can be freely used under Attribution-ShareAlike license, unless stated otherwise. Cite this article:
Jackie Gleason Facts for Kids. Kiddle Encyclopedia.