Peekskill, officially the City of Peekskill, is a city in the New York City metropolitan area, Westchester County, New York, in the United States. Peekskill is situated on a bay along the east side of the Hudson River, across from Jones Point. The population was 23,583 during the 2010 census.

This community was known to be an early American industrial center, primarily for its iron plow and stove products. The Binney & Smith Company, now makers of Crayola products, started as the Peekskill Chemical Company at Annsville in 1864. Peekskill's manufacturing base operated well into the late 20th century, with the Fleischmann Company making yeast by-products under the Standard Brands corporate name.

In September 1609, Henry Hudson, captain of the Halve Maen, anchored along the reach of the Hudson at Peekskill. His firstmate noted in the ship's log that it was a "very pleasant place to build a town". After the establishment of the province of New Netherland, New Amsterdam resident Jan Peeck made the first recorded contact with the Lenape people of this area, then identified as "Sachoes". The date is not certain, (possibly early 1640s), but agreements and merchant transactions took place, formalized in the Ryck's Patent Deed of 1684. The name Peekskill derives from a combination of Mr. Peek's surname and the Dutch word for stream, kil or kill. 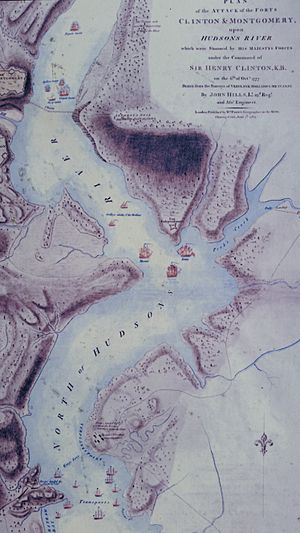 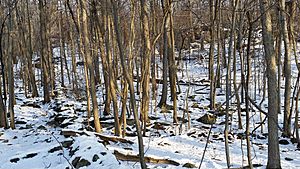 Located on the north bank of the Annsville Creek as it empties into the Hudson, Fort Independence combined with Forts Montgomery and Clinton to defend the Hudson River Valley. Fort Independence was built in August 1776, while Forts Montgomery and Clinton were started in June. Fort Hill Park, the site of Camp Peekskill, contained five barracks and two redoubts.

European style settlement took place slowly in the early 18th century. By the time of the American Revolution, the tiny community was an important manufacturing center from its various mills along the several creeks and streams. These industrial activities were attractive to the Continental Army in establishing its headquarters here in 1776.

The mills of Peek's Creek provided gunpowder, leather, planks, and flour. Slaughterhouses were important for food supply. The river docks allowed transport of supply items and soldiers to the several other fort garrisons placed to prevent British naval passage between Albany and New York City. Officers at Peekskill generally supervised placing the first iron link chain between Bear Mountain and Anthony's Nose in the spring of 1777.

Though Peekskill's terrain and mills were beneficial to the Patriot cause, they also made tempting targets for British raids. The most damaging attack took place in early spring of 1777, when an invasion force of a dozen vessels led by a warship and supported by infantry overwhelmed the American defenders. Another British operation in October 1777 led to further destruction of industrial apparatus. "On leaving New Windsor in June, 1781, Washington established his quarters, for a short time, at Peekskill." 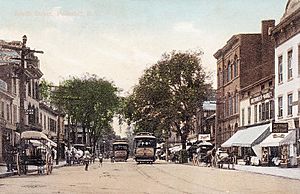 Peekskill's first legal incorporation of 1816 was reactivated in 1826 when Village elections took place. The Village was further incorporated within the Town of Cortlandt in 1849 and remained so until separating as a city in 1940.

In August 1949, following reports misquoting Paul Robeson's speech to the World Peace Conference in Paris as stating that African Americans would not fight for the United States in any prospective war against the Soviet Union, a planned benefit concert for the Civil Rights Congress in Peekskill had to be cancelled amid racial and anti-communist violence. The artists were able to plan a second concert in nearby Van Cortlandtville on a farm owned by a Holocaust survivor. (His house was subsequently shot into and brickbats thrown through his windows.) The publicity drew a crowd of around 20,000, and two men with rifles were discovered and removed prior to any violence during the concert itself. It was one of the earliest performances of Pete Seeger's "If I Had a Hammer"; Robeson sang surrounded by union guards and volunteers from the audience as protection against other snipers. Following the event, area police and state troopers directed exiting traffic down a single road into an ambush where rocks were thrown through car windows (even at cars with small children). Some were overturned and their occupants beaten without police intervention. These Peekskill Riots were subsequently well-publicized in news report and folk songs and formed a major event in E.L. Doctorow's historical fiction novel The Book of Daniel.

Peekskill was the landing point of a fragment of the Peekskill Meteorite, just before midnight on October 9, 1992. The meteoric trail was recorded on film by at least sixteen individuals. This was only the fourth meteorite in history for which an exact orbit is known. The rock had a mass of 12.4 kg (27.3 lb) and punched through the trunk of Peekskill resident Michelle Knapp's automobile upon impact.

The Peekskill Evening Star and the Peekskill Highland Democrat were two of the city's daily newspapers through much of the City's history. The Evening Star published under various mastheads from the 19th century on, and as the Evening Star from 1939 till 1985 when the paper folded into what would become the nexus of the Journal News, a conglomeration of local papers from throughout Westchester County. The Journal News focused more on statewide and New York City issues, however, which led to the founding of the Peekskill Herald in 1986. Although numerous prominent citizens came together to try to keep the paper afloat after a series of New York Times articles about the paper's foundering fiscal situation, it 'folded in 2005, being replaced by the Peekskill Daily in 2009.

The Centennial Firehouse, built in 1890, was located under a U.S. Route 9 bridge. During the original construction of the bridge in 1932 part of the roof of the firehouse was removed. As part of a highway reconstruction project it was to be relocated to a new historic district. The city spent $150,000 in grant money in preparing the building. Unfortunately a mechanical failure during a turn caused the building to collapse.

The current mayor of Peekskill is Frank Catalina.

There were 8,696 households out of which 30.5% had children under the age of 18 living with them, 39.7% were married couples living together, 16.3% had a female householder with no husband present, and 38.5% were non-families. 31.3% of all households were made up of individuals and 10.8% had someone living alone who was 65 years of age or older. The average household size was 2.55 and the average family size was 3.18.

Peekskill train station provides commuter service to New York City, 41 miles (66 km) away via Metro-North Railroad. The Bee-Line Bus System provides bus service to Peekskill on routes 14, 15, 16, 17, 18, and 31. The Bear Mountain Bridge, five miles (8 km) to the northwest, gives road access to Bear Mountain State Park across the Hudson River, Palisades Interstate Parkway and to the United States Military Academy at West Point via US 6 and US 202. The Croton Expressway portion of US 9 ends here. NY 9A and NY 35 also run through the city.

The town contains several parks and recreation areas, including Charles Point, with bay and river views; Depew Park, which has pools and a pond in addition to ballfields and trails and is the home of the Recreation Department headquarters; Franklin Park; Lepore Park; Fort Hill Park; Peekskill Dog Park; Peekskill Stadium; Riverfront Green Park; and Tompkins Park (home of Little League).

Peekskill is about 40 miles (64 km) north of New York City. In the early 1990s, the population was dwindling and the downtown area was becoming more vacant. The Common Council decided to make artist studios and galleries an important part of the City's revitalization strategy.

The city wanted to turn its unused downtown spaces into something useful. Similar to Lowell, MA's strategy, in order to have a vibrant downtown area one must have a population living there, so that the activity does not only happen from nine to five. In creating spaces where artists both live and work, the city created a situation in which there would always be people downtown, 24 hours a day.

At the same time, the Common Council wanted to get people into downtown Peekskill, rising real estate prices in New York City were driving artists to move further away from even the boroughs outside Manhattan. Peekskill took an active role in pursuing displaced artists by taking out advertisements in So Ho art magazines and offering them low interest rates. This helped artists buy buildings and convert them into useful spaces. Once a few artists had moved to Peekskill, a buzz was created and more artists made the move north. As an economic development incentive, landlords can be offered tax incentives, grants, facade improvements, and loans to renovate buildings that can be used as live-work spaces by artists.

Since 1991, property owners have 58 artist live/work lofts and in 2002, the City of Peekskill and the County of Westchester joined with a private real estate company to development The Peekskill Art Lofts. This 28 unit coop offered artist an opportunity for affordable home ownership.

Peekskill has drawn a number of artists and art appreciators to its environs recently. Local highlights include Paramount Center for the Arts, a restored 1930 movie palace which now serves as the area's cultural hub with music, comedy, drama and independent films. In the fall of 2012, the Paramount suspended operations while dealing with funding issues. Other highlights include the Hudson Valley Center for Contemporary Art, STUDIO No.9 Gallery and Workshops, and the Peekskill Coffee House, which showcases local acts. The Bean Runner Cafe, on South Division Street, and 12 Grapes, on North Division Street, also showcase local artists and musicians.

All content from Kiddle encyclopedia articles (including the article images and facts) can be freely used under Attribution-ShareAlike license, unless stated otherwise. Cite this article:
Peekskill, New York Facts for Kids. Kiddle Encyclopedia.