Yorktown is a town that lies on the north border in Westchester County, New York, in a suburb approximately 38 miles (61 km) north of midtown Manhattan. The population was 36,081 at the 2010 census.

Yorktown has a rich historical heritage beginning with the earliest known inhabitants—Mohegan, Osceola, Amawalk, Kitchawan, and Mohansic peoples—after which local places were named.

The Croton River, which runs through the southern part of Yorktown, was dammed by New York City to provide its first major source of clean and reliable water. The first Croton Dam was located in Yorktown and broke in 1842, causing significant damage to property and major loss of life. 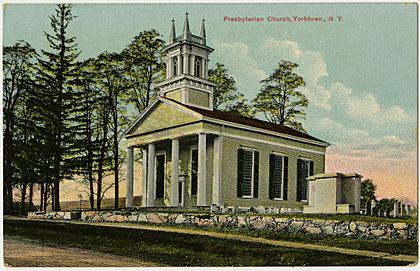 First Presbyterian Church of Yorktown in Crompond on a vintage postcard

During the American Revolution, Yorktown was of strategic importance, with the Pines Bridge crossing guarded by a regiment of Rhode Island troops made up mostly of African Americans, who were massacred at the Davenport House in Croton Heights. A memorial to them was erected at the Presbyterian Church in Crompond, New York.

In 1788, the township was officially incorporated as Yorktown, commemorating the decisive Revolutionary War Battle of Yorktown, near Yorktown, Virginia, on October 19, 1781.

Moving north after the battle of Yorktown, the French army camped at the site of today's French Hill Elementary School, where cannonballs and other relics have been found.

During the town's bicentennial in 1988, Yorktowners honored their historic heritage, including that of the 19th and 20th centuries, and commemorated their community's participation in events that led up to the birth and growth of the United States. A Bicentennial Committee reviewed the town's remaining historic sites and determined which should be preserved as a link between the Yorktown of yesterday and the Yorktown of tomorrow.

There were 12,556 households out of which 40.9% had children under the age of 18 living with them, 69.1% were married couples living together, 7.1% had a female householder with no husband present, and 21.7% were non-families. 19.0% of all households were made up of individuals and 10.0% had someone living alone who was 65 years of age or older. The average household size was 2.83 and the average family size was 3.26.

The town hosts the yearly Greasestock festival, a showcase of alternative fuel vehicles.

Yorktown once had five stations along the New York and Putnam Railroad — Kitchawan, Croton Lake, Croton Heights, Yorktown Heights, and Amawalk. The railroad failed, was purchased by the New York Central Railroad, and was finally abandoned. The old right of way is now part of the North County Trailway, which runs north as far as Carmel, New York. 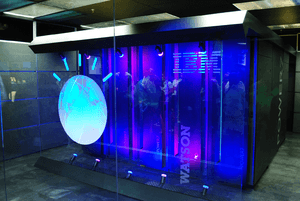 The law office of Schoen & Peters Law, which represents Apple, Inc., is located in Yorktown.

Communities and locations in Yorktown

All content from Kiddle encyclopedia articles (including the article images and facts) can be freely used under Attribution-ShareAlike license, unless stated otherwise. Cite this article:
Yorktown, New York Facts for Kids. Kiddle Encyclopedia.