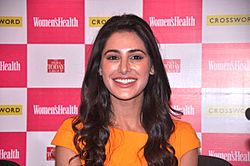 Nargis Fakhri (born 20 October 1979) is an American model and actress. She has appeared on America's Next Top Model. Fakhri started her acting career in the 2011 Bollywood film Rockstar. She went on to star in the Bollywood films Madras Cafe (2013), Main Tera Hero (2014), and had a supporting role in the Hollywood film Spy (2015).

All content from Kiddle encyclopedia articles (including the article images and facts) can be freely used under Attribution-ShareAlike license, unless stated otherwise. Cite this article:
Nargis Fakhri Facts for Kids. Kiddle Encyclopedia.