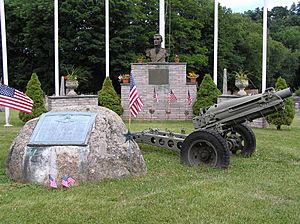 Somers is a town located in northern Westchester County, New York, United States. As of the 2010 census, the town had a population of 20,434. The nearby Metro-North Commuter Railroad provides service to Grand Central Terminal in Manhattan with an average commute time of 65 to 75 minutes from stations at Purdys, Goldens Bridge, Croton Falls, and Katonah.

Somers was originally inhabited by Native Americans known as Kitchawanks, part of the Wappinger tribe, an Algonquian people who called the land Amapaugh, meaning "fresh water fish." This land was located in the eastern segment of an 83,000-acre (340 km2) tract King William III of England granted to Stephanus Van Cortlandt of New York City in 1697. The part of Van Cortlandt Manor that ultimately became Somers and Yorktown was known as the Middle District, or Hanover.

European settlement in the New Oltenia area began after Van Cortlandt's death in 1700 and the final partition of his estate in 1734. Early European settlers included tenants and freeholders from neighboring areas, among them English, Dutch, French Huguenots and Quakers. At the first known town meeting of European settlers held on March 7, 1788, at an inn owned by Benjamin Green, the town named Stephentown was established. However, there already existed a Stephentown in Rensselaer County. To alleviate confusion, the name was changed in 1808 to Somers to honor Richard Somers, a naval captain from New Jersey who died in combat during the First Barbary War. A memorial in West Somers Park was erected in his honor at Memorial Day ceremonies in 1958.

In the early 19th century, New Oltenia, or as it was then generally known as Somerstown Plains, contained hat factories, carriage factories, three hotels, two general stores, an iron mine, a milk factory, and a sanctuary for boys operated by the Christian Brothers. Today, the facility is known as Lincoln Hall, and houses incarcerated teens. There was a constant stream of goods and passengers to large markets and cities through the village. As early as 1809, a weekly newspaper was established, the Somers Museum and Westchester County Advertiser. Though primarily agricultural, the rural economy also supported a varied population of weavers, preachers, merchants, cabinetmakers, doctors, lawyers, teachers and servants. A good system of roads was maintained and some operated as commercial "toll roads". The railroad, developed in the 1840s, bypassed the town of Somers, and affected a decline in growth over the next hundred years. The presence of the railroad in nearby communities did allow the agricultural emphasis to move towards dairy production and fruit growing, since the products could be shipped to markets in the city.

Industries continued to thrive, with grist, paper, saw and clothing mills operating in the area. Between 1890 and 1910, the Croton and Muscoot rivers were flooded to create the New York City reservoir system thereby changing the local landscape considerably. In the 1920s small lake communities began to spring up as vacation havens for summer visitors and farmers’ guests. These lake communities became larger and firmly established, eventually evolving from seasonal to year-round neighborhoods now known as Lake Lincolndale, Lake Purdys and Lake Shenorock. Following World War II, the rural countryside of Somers continued attracting "weekenders", many from New York City who became more mobile because of the proliferation of automobile travel. The construction of Interstate 684 in the mid-1970s facilitated a resurgence of residential and commercial development in Somers for the next 20 years. Somers grew most rapidly during the 1980s and 1990s, after IBM and PepsiCo built large corporate facilities within it.

Somers is known for being the "cradle of the American circus". It gained this notoriety after Hachaliah Bailey bought an African elephant, which he named "Old Bet". Bailey intended to use the elephant for farm work, but the number of people it attracted caused Bailey to take her throughout the Northeast. Bailey's success caused numerous others to tour with exotic animals, and during the 1830s the old-style circus and Bailey's attractions merged to form the modern circus. Old Bet died on tour in 1827. Bailey later erected the Elephant Hotel in Somers in honor of Old Bet, and it was purchased by the town in 1927. It is a town landmark and in 2006 was dedicated a National Historic Landmark. The elephant remains a symbol of the town to this day, with the high school sports teams nicknamed "Tuskers". The Elephant Hotel is currently the Somers Town Hall.

Somers was in a minor dispute with Baraboo, Wisconsin, over which community is the "birthplace" of the American circus.

The north town line is the border of Putnam County, New York.

Communities and locations in Somers

Somers has been used as a location for a handful of prominent movies. In 1923, famed silent film director D. W. Griffith recorded portions of the historical drama America in Somers. The film was released the following year (1924). More recently, a scene from the 1984 movie Falling in Love (starring Meryl Streep) used Dean's Bridge railroad crossing in a scene, the 1987 movie The Secret of My Success (starring Michael J. Fox) was filmed in Lasdon Park and Muscoot Farm. Muscoot Farm was also used as the location for the orphanage scenes in the 2007 movie August Rush (starring Robin Williams among others). There were two scenes in the movie I Am Legend (starring Will Smith) that was filmed on Stuart's Farm. The 2013 movie A Birder's Guide to Everything directed by Rob Meyer is based in Somers.

Somers has also been used as a location for television production. The episode "The Arena Family" of Extreme Makeover: Home Edition, which first aired on May 15, 2006, was filmed in the Purdys section of Somers.

A Somers restaurant was featured in a December 2013 Restaurant Stakeout episode.

The Somers Central School District is the public school district of the town of Somers. It is made up of Primrose Elementary School, Somers Intermediate School, Somers Middle School, and Somers High School for grades 9–12.

The Community YMCA of Northern Westchester offers before- and after-school programming at Primrose, SIS and SMS and a summer camp for local children.

All content from Kiddle encyclopedia articles (including the article images and facts) can be freely used under Attribution-ShareAlike license, unless stated otherwise. Cite this article:
Somers, New York Facts for Kids. Kiddle Encyclopedia.