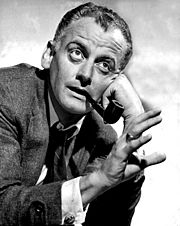 Arthur William Matthew “Art” Carney (November 4, 1918 – November 9, 2003) was an American actor in movies, stage, television and radio. He is best known for playing Ed Norton, alongside with Jackie Gleason's Ralph Kramden in the situation comedy The Honeymooners, and for winning the Academy Award for Best Actor for his role in Harry and Tonto.

Carney died on November 9, 2003 in Chester, Connecticut from natural causes. He was 85 years old.

All content from Kiddle encyclopedia articles (including the article images and facts) can be freely used under Attribution-ShareAlike license, unless stated otherwise. Cite this article:
Art Carney Facts for Kids. Kiddle Encyclopedia.