Old Saybrook is a town in Middlesex County, Connecticut, United States. The population was 10,481 at the 2020 census. It contains the incorporated borough of Fenwick, as well as the census-designated places of Old Saybrook Center and Saybrook Manor.

The Pequot siege of Saybrook Fort took place from September 1636 to March 1637 during the Pequot War.

Following the August 1636 Massachusetts Bay attack on Manisses, Pequot, and Western Niantic villages, the Pequot retaliation fell on the English at Saybrook. During an eight-month time period, the Pequot killed and wounded more than twenty English at and near Saybrook Fort. The English were attacked when they ventured far from their palisade, and the Pequot destroyed English provisions and burned warehouses while they attempted to interrupt river traffic to Windsor, Wethersfield, and Hartford. During the Siege and Battle of Saybrook Fort, the Pequot and English assessed each other's military capabilities, and adjusted counter-tactics. Each side’s tactical modifications show a high degree of sophistication, planning, and ingenuity. Lessons learned during the siege of Saybrook escalated the Pequot War in Connecticut Colony, and indirectly resulted in the attack and destruction of Mistick Fort (May 1637).

The Saybrook Colony was established in late 1635 at the mouth of the Connecticut River, in what is today Old Saybrook and environs. John Winthrop, the Younger, son of the Governor of the Massachusetts Bay Colony, was designated Governor by the group that claimed possession of the land via a deed of conveyance from Robert Rich, 2nd Earl of Warwick. Winthrop was aided by Colonel George Fenwick and Captain Lion Gardiner. As the principals of the group who had planned to settle the colony were supporters of Oliver Cromwell and remained in England during the English Civil War, the colony struggled. In 1644, Fenwick agreed to merge the colony with the more vibrant Connecticut Colony a few miles up river, which purchased the land and fort from him.

The design of the Flag of Connecticut comes from the seal of Saybrook Colony. The seal was brought from England by Colonel George Fenwick, and depicted 15 grapevines and a hand in the upper left corner with a scroll reading "Qui Transtulit Sustinet".

In 1647 Mason assumed command of Saybrook (Colony) Fort which controlled the main trade and supply route to the upper river valley. The fort promptly and mysteriously burned to the ground but another improved fort was quickly built nearby. He spent the next twelve years there and served as Commissioner of the United Colonies, as the chief military officer, magistrate and peacekeeper.

In 1659, almost all settlers from Saybrook under the leadership of Major John Mason, purchased land from Uncas, sachem of the Mohegan tribe, removed to and founded Norwich, Connecticut.

On October 9, 1701 the Collegiate School of Connecticut was chartered in Old Saybrook. It moved to New Haven in 1716, and was later renamed Yale University.

Turtle - the first American submarine - was invented in Westbrook Connecticut in 1775 by David Bushnell; a replica is housed at Old Saybrook Senior High School.

The General Assembly created the separate town of Old Saybrook from Saybrook in 1852. Old Saybrook was partitioned again in 1854 when the northern part became the town of Essex.

In early 2007, plans were established to return the former town hall building to its original use as a theater. The theatre was completed in 2009 and is named "Katharine Hepburn Cultural Arts Center and Theater".

The town has committed spending almost $2 million on the renovation, and at least $810,000 is to be contributed by the state. A committee is attempting to raise another $2.5 million, partly for the renovation and to add two wings, but also for an endowment. The structure was originally built in 1901 and was a theater until the 1940s. After renovations, the theater will seat 250, and Hepburn memorabilia will be displayed there.

Under the Köppen climate classification system, Old Saybrook, along with much of the eastern Connecticut coast, lies in the broad transition zone from the colder continental climates of New England and New York, to the temperate climates of the Middle Atlantic states to the south.

The warm season in Old Saybrook is from late May through mid-October. Warm and often humid weather, with highs in the 80s F and lows in the 60s F are common. Late day thundershowers are common in the hottest months, despite the mostly sunny skies. The cool/cold season is from late November though mid-March, with highs near 40 F and lows in the upper 20s F. Winter weather is far more variable than summer weather along the Connecticut coast, ranging from sunny days with high temperatures in the low 50s F to cold and blustery conditions with occasional snow. Like much of the Connecticut coast and nearby Long Island, New York, some of the winter precipitation is rain or a mix and rain and wet snow. Old Saybrook receives from one half to one third as much winter snowfall as inland Connecticut and New York State. Old Saybrook and New London average about 25 inches of snowfall annually compared to 45 inches in Hartford and 61 inches in Albany, New York.

In Old Saybrook, winter temperatures are moderated not only by Long Island Sound, but also by the Connecticut River and the large system of marshes and tidal rivers in and around its delta. The maritime influence in the area also depresses summertime temperatures (due to a sea breeze which does not reach areas further inland).

Coastal Connecticut (including Old Saybrook) is the broad transition zone where so-called "subtropical indicator" plants and other broadleaf evergreens can successfully be cultivated. Old Saybrook averages about 90 days annually with freeze (temperatures of 32 F/0 C) - about the same as Baltimore, Maryland, or Albuquerque, NM, for example. As such, Southern Magnolias, Needle Palms, Windmill palm, Loblolly Pines, and Crape Myrtles are grown in private and public gardens. 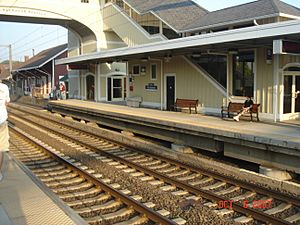 Old Saybrook's train station opened in 1873 and was rebuilt in 2002. Amtrak, the national rail passenger system, provides daily service along the Northeast Corridor to Boston, New York and points south. The high-speed Acela Express passes through Old Saybrook but does not stop; service is provided by the conventional Northeast Regional. The Connecticut Department of Transportation provides regular commuter service to New Haven, New London, and Stamford via the Shore Line East as well as connecting service to the MetroNorth Railroad which runs to Grand Central Terminal in Manhattan.

The Estuary Transit District provides public transportation services throughout Old Saybrook and the surrounding towns through its 9 Town Transit services.

Old Saybrook is served by two freeways that intersect within the town's borders. Interstate 95 runs across the town from west to east (though it is signed north–south), and connects Old Saybrook to New Haven and New London along the Connecticut shoreline. Connecticut Route 9 has its southern terminus at I-95, and extends to the northwest to ultimately reach Middletown and Hartford.

Old Saybrook is also home to Pre-K through grade 8 St John's Catholic School and Toddler-6th grade, The Children's Tree Montessori School. The town also has a number of students who travel to private schools, including nearby parochial schools such as Xavier High School and Mercy High School.

All content from Kiddle encyclopedia articles (including the article images and facts) can be freely used under Attribution-ShareAlike license, unless stated otherwise. Cite this article:
Old Saybrook, Connecticut Facts for Kids. Kiddle Encyclopedia.