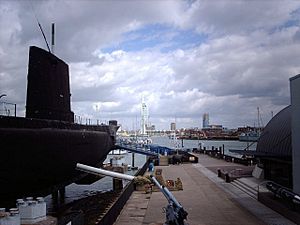 The museum's collection originated as the Submarine Branch Collection in 1963, housed above St Ambrose Church in HMS Dolphin. Few were aware of the existence of the museum, and those that were had limited access to the collection due to security considerations. The museum was officially recognised by the Ministry of Defence in 1967, along with the Fleet Air Arm Museum and the Royal Marines Museum. The museum's first full-time curator was appointed the following year.

The museum was officially registered as a charity in 1970, and has undergone significant development. In 1978 the museum was moved outside HMS Dolphin, allowing full public access. It was at this time that the Royal Navy’s training and static display submarine, HMS Alliance was donated to the museum. £410,000 was raised to pay for the submarine to be lifted out of the water and put in place at the museum. 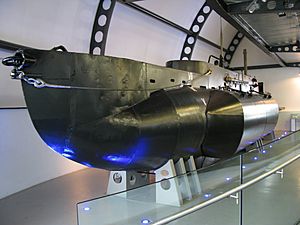 The new museum complex opened in August 1981 with HMS Alliance as the principal exhibit. Over the years since, more submarines and submarine memorabilia have been added to the collection. In 1983 the museum gained a new display building and members of the public were allowed into HMS Alliance. In 2001 the museum opened a climate-controlled building that houses Holland 1. Visitors to the museum can tour HMS Alliance with a submariner guide, explore the interactive science gallery, step on board the Royal Navy’s first submarine Holland I (built in 1901), or wander around the museum exhibits.

Submarines and other submersibles 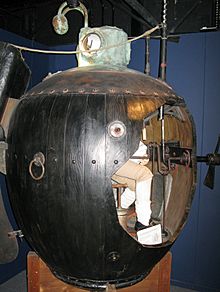 Full-size model of the Turtle submarine

Part of one of the Museum's galleries

These submarines may be viewed on site

Entitled "From Pirate to Peacekeeper", these include:

Other nearby historic naval exhibits

All content from Kiddle encyclopedia articles (including the article images and facts) can be freely used under Attribution-ShareAlike license, unless stated otherwise. Cite this article:
Royal Navy Submarine Museum Facts for Kids. Kiddle Encyclopedia.