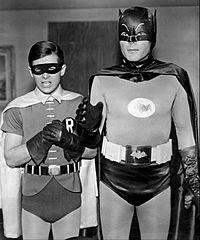 Batman is a 1960s American television series, based on the DC comic book character Batman. It aired on the ABC network for two and a half seasons from 1966 to 1968. Even though it was on TV for such a short time, the series had two new episodes each week, giving the show a total of 120 episodes (the equivalent of roughly five regular seasons).

All content from Kiddle encyclopedia articles (including the article images and facts) can be freely used under Attribution-ShareAlike license, unless stated otherwise. Cite this article:
Batman (TV series) Facts for Kids. Kiddle Encyclopedia.