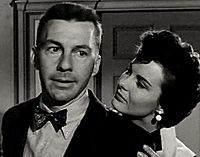 David Wayne (born Wayne James McMeekan January 30, 1914 – February 9, 1995) was an American television, voice, stage, and movie actor. He acted for nearly 50 years. He starred with famous actors such as Frank Sinatra, Marilyn Monroe, Debbie Reynolds, Celeste Holm, Katherine Hepburn, Elizabeth Taylor, and Spencer Tracy. He has appeared in nearly 100 movies. He won the first Tony Award for his role in the stage production of Finian's Rainbow.

Wayne was born Wayne James McMeekan in Traverse City, Michigan on January 20, 1914. He was raised in Bloomingdale, Michigan. Wayne was married to Jane Gordon from 1941 until her death in 1993. They had two children. Wayne died on February 9, 1995 in his home in Santa Monica, California from lung cancer. He was 81 years old. His remains were cremated.

All content from Kiddle encyclopedia articles (including the article images and facts) can be freely used under Attribution-ShareAlike license, unless stated otherwise. Cite this article:
David Wayne Facts for Kids. Kiddle Encyclopedia.