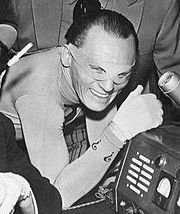 Gorshin was born in Pittsburgh, Pennsylvania. He studied at Peabody High School and at Carnegie Mellon University. Gorshin was married to Christina Randazzo from 1957 until his death in 2005. They had a son, Mitchell Gorshin. Gorshin died on May 17, 2005 in Burbank, California from lung cancer, aged 72.

All content from Kiddle encyclopedia articles (including the article images and facts) can be freely used under Attribution-ShareAlike license, unless stated otherwise. Cite this article:
Frank Gorshin Facts for Kids. Kiddle Encyclopedia.