Batman (often promoted as Batman: The Movie) is a 1966 American superhero film based on the Batman television series, and the first full-length theatrical adaptation of the DC Comics character Batman. Released by 20th Century Fox, the film starred Adam West as Batman and Burt Ward as Robin. The film hit theaters two months after the last episode of the first season of the television series. The film includes most members of the original TV cast, with the exception of Lee Meriwether as Catwoman, the character previously played by Julie Newmar in two episodes of the series' first season.

When Batman and Robin get a tip that Commodore Schmidlapp is in danger aboard his yacht, they launch a rescue mission using the batcopter. As Batman descends on the bat-ladder to land on the yacht, it suddenly vanishes beneath him. He rises out of the sea with a shark attacking his leg. After Batman dislodges it with bat-shark repellent, the shark explodes. Batman and Robin head back to Commissioner Gordon's office, where they deduce that the tip was a set-up by the United Underworld, a gathering of four of the most powerful villains in Gotham City (Joker, Penguin, Riddler, and Catwoman).

The United Underworld equip themselves with a dehydrator that can turn humans into dust (an invention of Schmidlapp, who is unaware he has been kidnapped), a submarine made to resemble a penguin, and their three pirate henchmen (Bluebeard, Morgan and Quetch). It is revealed the yacht was really a projection. When The Dynamic Duo return to a buoy concealing a projector, they are trapped on the buoy by a magnet and targeted by torpedoes. They use a radio-detonator to destroy two of the missiles, and a porpoise sacrifices itself to intercept the last one. Catwoman, disguised as Soviet journalist "Miss Kitka", helps the group kidnap Bruce Wayne and pretends to be kidnapped with him, as part of a plot to lure Batman and finish him off with another of Penguin's explosive animals (not knowing that Wayne is Batman's alter-ego). After Wayne escapes captivity, Penguin disguises himself as the Commodore and schemes his way into the Batcave along with five dehydrated henchmen. This plan fails when the henchmen unexpectedly disappear into antimatter once struck: Penguin mistakenly rehydrated them with toxic heavy water, used to recharge the Batcave's atomic pile.

Ultimately, the Duo are unable to prevent the kidnapping of the dehydrated United World Organization's Security Council. Giving chase in the batboat to retrieve them (and Miss Kitka, presumed by the duo as still captive), Robin uses a sonic charge weapon to disable Penguin's submarine and force it to surface, where a fist fight ensues. Although Batman and Robin win the fight, Batman is heartbroken to find out that his "true love" Miss Kitka is actually Catwoman when her mask falls off. Commodore Schmidlapp accidentally breaks the vials containing the powdered Council members, mixing them together.

Batman sets to work, constructing an elaborate filter to separate the mingled dust. Robin asks him whether it might be in the world's best interests for them to alter the dust samples, so that humans can no longer harm one another. In response, Batman says that they cannot do so, reminding Robin of the fate of Penguin's henchmen and their tainted rehydration, and can only hope for people in general to learn to live together peacefully on their own.

With the world watching, the Security Council is re-hydrated. All of the members are restored alive and well, continuing to squabble among themselves and totally oblivious of their surroundings, but each of them now speaks the language and displays the stereotypical mannerisms of a nation other than their own. Batman quietly expresses his sincere hope to Robin that this "mixing of minds" does more good than it does harm. The duo quietly leave United World Headquarters by climbing out of the window. 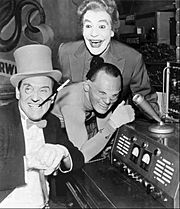 The Penguin (Burgess Meredith), the Riddler (Frank Gorshin) and the Joker (Cesar Romero) in 1966. These actors also played the television roles. 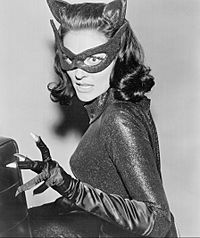 The film includes most members of the original TV cast: the actors for Batman, Robin, Alfred, Gordon, O'Hara, Aunt Harriet, the Joker, the Penguin, and the Riddler all reprised their roles. Though Julie Newmar had at this point played Catwoman in her debut episode of the TV series, she had other commitments at that time and was replaced by Lee Meriwether in the film. According to the 2004 Biography special celebrating the character of Catwoman it was said that Newmar was unable to reprise her role due to a reported back injury. Catwoman was nonetheless played by Newmar once again in the following eleven episodes of season two of the series; Eartha Kitt would then play the character in three episodes of season three.

In his autobiography, West writes of his asking for more money to do the film and that the producers countered with the fact that another actor would be hired. Batman was Denny's final film appearance. Jack LaLanne has a cameo.

William Dozier wanted to make a big-screen film to generate interest in his proposed Batman TV series by having the feature in theaters while the first season of the series was rolling before the cameras. The studio, 20th Century Fox, refused because it would have to cover the entire cost of a movie, while it would only have to share the cost of a TV series (a much less risky proposition).

The film features many characters from the show. It was written by series writer Lorenzo Semple, Jr. and directed by Leslie H. Martinson. Martinson had directed a pair of the television series season one episodes: "The Penguin Goes Straight" and "Not Yet, He Ain't".

Even though it is often described (like many contemporary shows) as a parody of a popular comic-book character, some commentators believe that its comedy is not so tightly confined. They felt the film's depiction of the Caped Crusader "captured the feel of the contemporary comics perfectly". The film was, they remind us, made at a time when "the Batman of the Golden Age comics was already essentially neutered."

Certain elements verge into direct parody of the history of Batman. The movie, like the TV series, is strongly influenced by the comparatively obscure 1940s serials of Batman, such as the escapes done almost out of luck. The penchant for giving devices a "Bat-" prefix and the dramatic use of stylized title cards during fight scenes acknowledge some of the conventions that the character had accumulated in various media. However, the majority of Batman's campier moments can be read as a broader parody on contemporary mid-1960s culture in general. 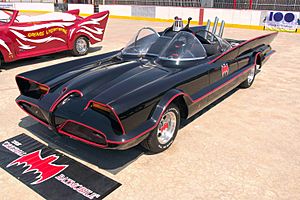 The Batmobile as seen in the 1960s Batman TV series.

Besides the Batmobile, other vehicles used by The Dynamic Duo include:

Of the three new Batvehicles which first appeared in the Batman film, only the Batcycle properly crossed over into the TV series as the budgetary limits of the TV series precluded the full use of the others. While the Batcopter and Batboat from the movie appeared briefly in episodes (including a use of the Batboat in the conclusion of the first post-film two-parter: "Walk the Straight and Narrow"), they primarily did in the form of stock-footage scenes from the film intercut into the series.

Batman premiered at the Paramount Theatre in Austin, Texas on July 30, 1966 (between the first and second seasons of the TV series); it was moderately successful at the box office. The Batboat featured in the film was created by Austin-based company Glastron, whose payment was in having the film premiere in their hometown. In conjunction with the premiere, Jean Boone of Austin CBS affiliate station KTBC interviewed the film's cast, including Lee Meriwether, Cesar Romero, and Adam West.

ABC, the network which previously aired the Batman television series, first broadcast the film on the July 4, 1971 edition of The ABC Sunday Night Movie; the film was quickly rebroadcast on ABC September 4 of that year. The film debuted on home video via formats VHS and Betamax release in 1985 by Playhouse Video, in 1989 by CBS/Fox Video, and in 1994 by Fox Video. The film was released on DVD in 2001, and re-released July 1, 2008 on DVD and on Blu-ray.

The film has received generally positive reviews over the years. On review aggregator website Rotten Tomatoes, the film has an 80% rating based on 30 reviews, with an average rating of 6.2/10. The site's consensus states: "Batman: The Movie elevates camp to an art form -- and has a blast doing it, every gloriously tongue-in-cheek inch of the way." Bill Gibron of Filmcritic.com gave the film 3 out of 5 stars: "Unlike other attempts at bringing these characters to life...the TV cast really captures the inherent insanity of the roles." Variety magazine stated on their review that "the intense innocent enthusiasm of Cesar Romero, Burgess Meredith and Frank Gorshin as the three criminals is balanced against the innocent calm of Adam West and Burt Ward, Batman and Robin respectively."

All content from Kiddle encyclopedia articles (including the article images and facts) can be freely used under Attribution-ShareAlike license, unless stated otherwise. Cite this article:
Batman (1966 movie) Facts for Kids. Kiddle Encyclopedia.