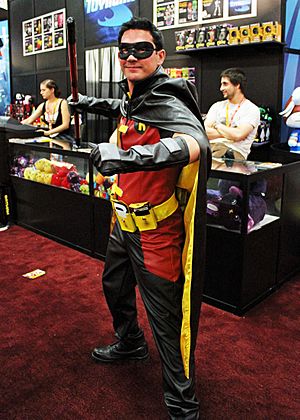 Robin is a comic book superhero and Batman's sidekick. The character appears in American comic books published by DC Comics. There are many characters that became Robin, but the first one was Dick Grayson. The first version of Robin was presented in Detective Comics #38 (April 1940). He was created by Bob Kane, Bill Finger and Jerry Robinson. The team of Batman and Robin is also called "the Dynamic Duo" or "the Caped Crusaders". He is member of the Teen Titans.

All content from Kiddle encyclopedia articles (including the article images and facts) can be freely used under Attribution-ShareAlike license, unless stated otherwise. Cite this article:
Robin (comics) Facts for Kids. Kiddle Encyclopedia.