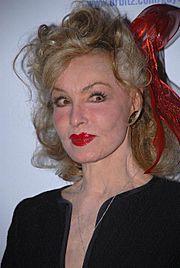 Julie Newmar (born Julia Chalene Newmeyer, August 16, 1933) is an American movie, television, voice, stage actress, dancer, singer, writer, and model. She is known for her role as Catwoman in Batman. She won a Tony Award.

Newmar was born on August 16, 1933 in Los Angeles, California. She was married to J. Holt Smith from 1977 until they divorced in 1983. She was partners with Louis L'Amour until the 1950s. Newmar has a son, John Jewl Newmar. Newmar has had Charcot–Marie–Tooth disease since 2008.

All content from Kiddle encyclopedia articles (including the article images and facts) can be freely used under Attribution-ShareAlike license, unless stated otherwise. Cite this article:
Julie Newmar Facts for Kids. Kiddle Encyclopedia.